Remember how I pointed out, in our last entry on the "songs to creep out Tipper Gore by" playlist, that the Washington Wives had some laughably misplaced priorities?

I want you to keep that in mind while we examine number seven out of the "Filthy Fifteen," "We're Not Gonna Take It" by Twisted Sister.

The PMRC's objections to this song centered around the "violent" music video, in which a suburban dad--his name seems to be Douglas, but he's such a jerk that we should probably be calling him Daddie Dearest instead-- treats his teenage children like crap until they transform into avenging rock stars and give him a taste of his own medicine.


I think the complaints of violence stem from that one iconic scene where Dee Snider drags Douglas down the stairs by his head: 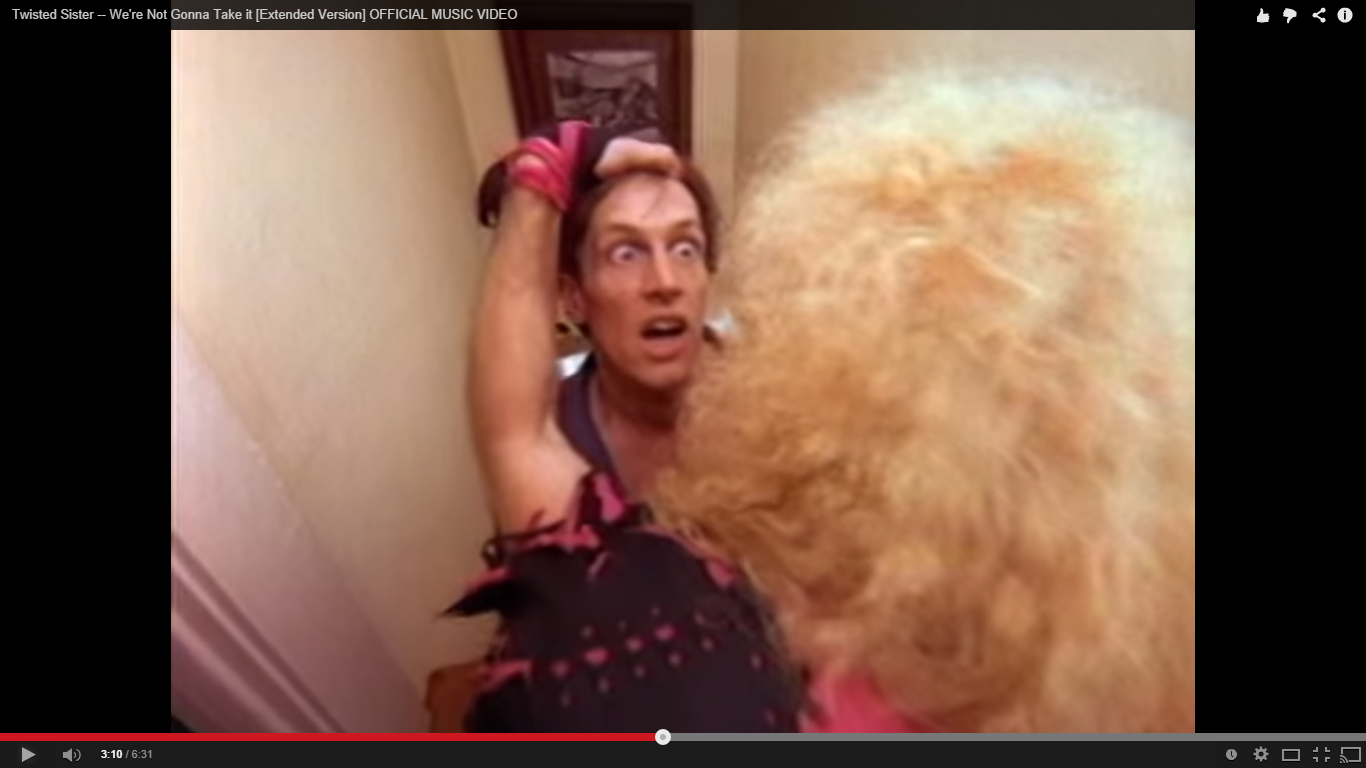 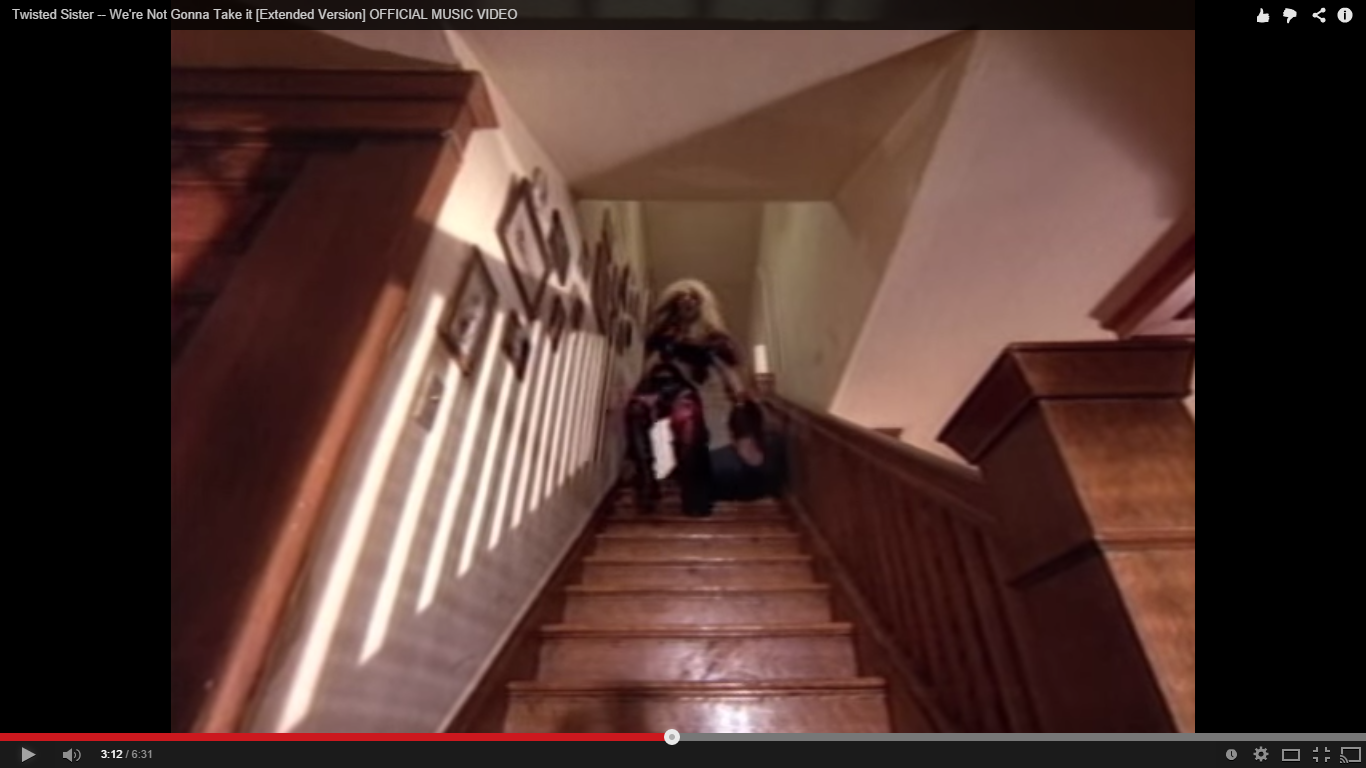 What I'd like to know, though, is why the PMRC wasn't more concerned about the circumstances that led up to the epic kicking of old Daddie Dearest Douglas's ass. For a group that claimed to be so concerned about children, I never heard of them complaining about how terrible this guy is to his family.

It's made pretty clear from the very beginning of the video that Douglas is a raging asshole. The dude can't even say "Pass the carrots, please" without making it sound like he's going to follow it up with "...or I'll kick your fucking head right off your scrawny shoulders!" Just look at the face his wife makes when one of the kids asks (perfectly politely, I'd like to point out) to be excused from the dinner table: 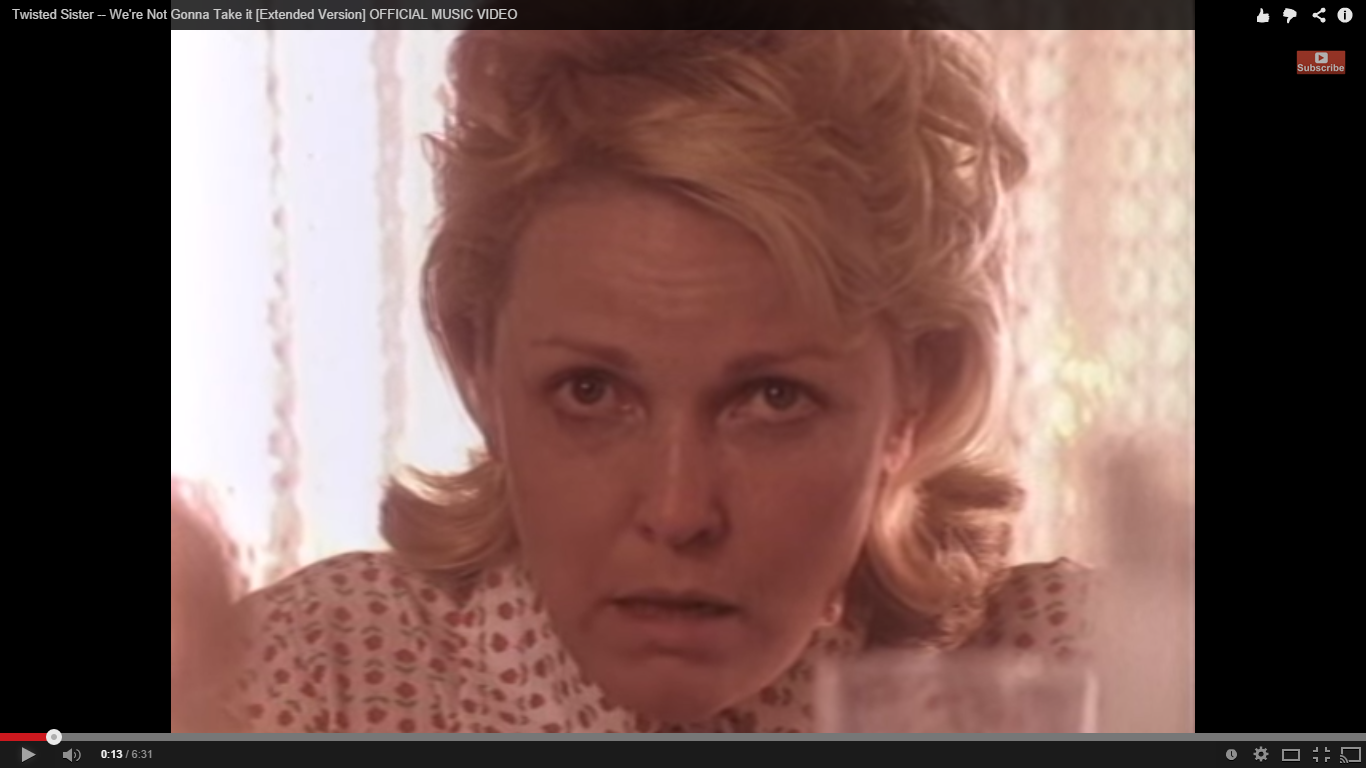 That, my dears, is the face of a woman who knows that her abusive husband will stomp her senseless if she gives the wrong answer.

Then the excused-from-the-table son starts playing rock music in his room at a volume that's just barely audible from the dining room, and dad is so offended by this that he bursts into his son's room and starts ranting about having carried an M16 (holy shit, was there a time when the US Army was so desperate for recruits that this hair-trigger maniac would have passed weapons training?) and yelling at the kid to clean his room while throwing stuff around to make the room even less tidy, because that makes perfect sense. 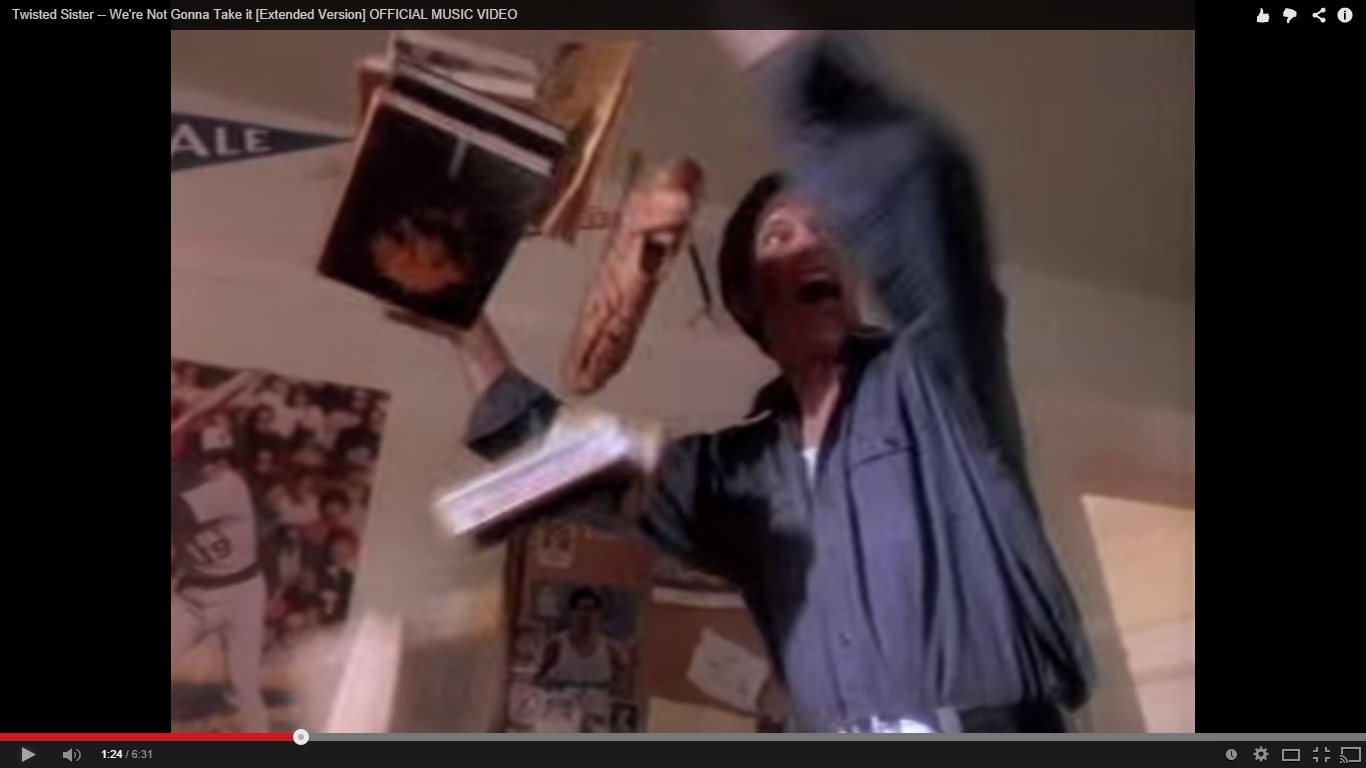 Also, is it just me, or does that kid's room look plenty tidy already? 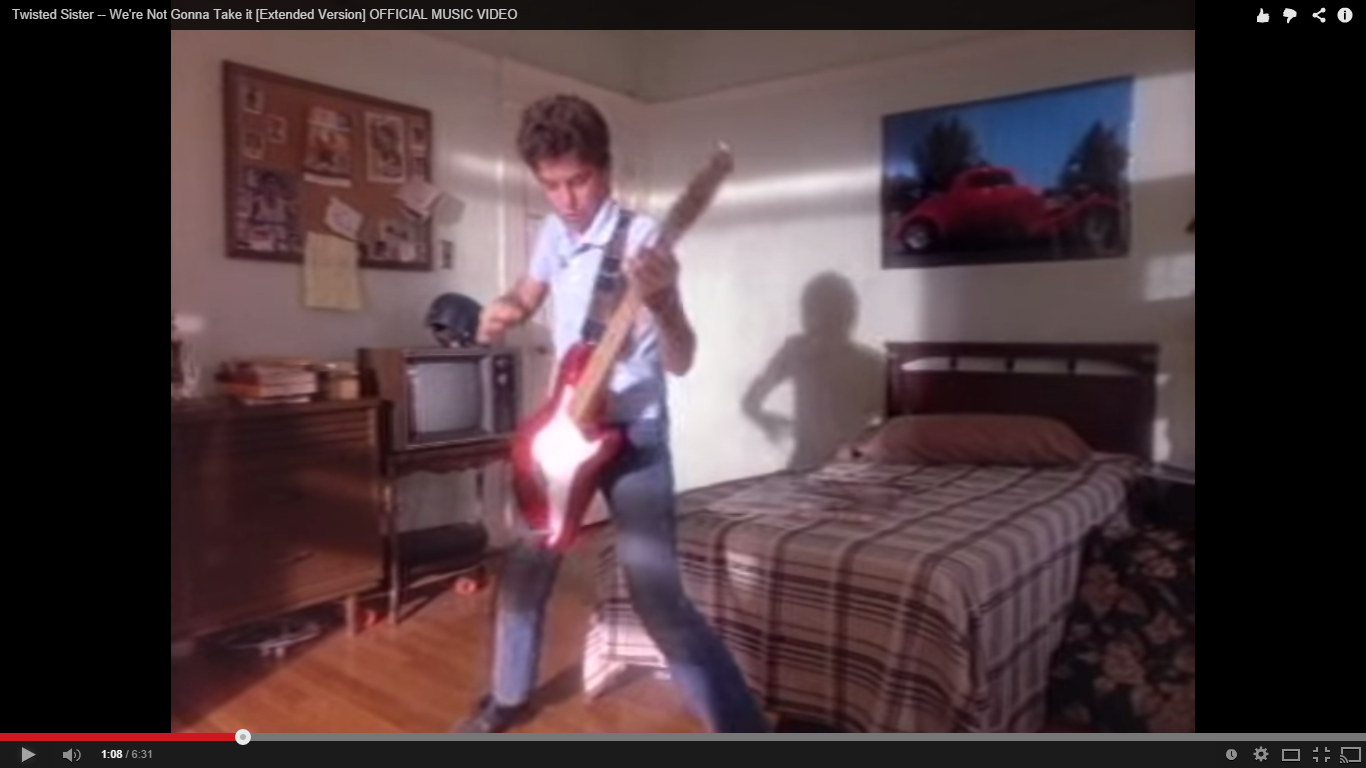 I'd also like to point out that all the other misfortunes Douglas encounters in this video are, quite frankly, his own stupid fault.

Most of the violence visited upon him is basically him being blasted out of windows by the sheer power of rock and accidentally swinging into the side of the house on a rope swing. Aside from the scene where he gets dragged down the stairs, when do we ever see a member of Twisted Sister actively lay a hand on him? The closest they come is that one scene where they're all filing out a door one by one, and Douglas is standing on the other side of the door and gets dinged in the face: 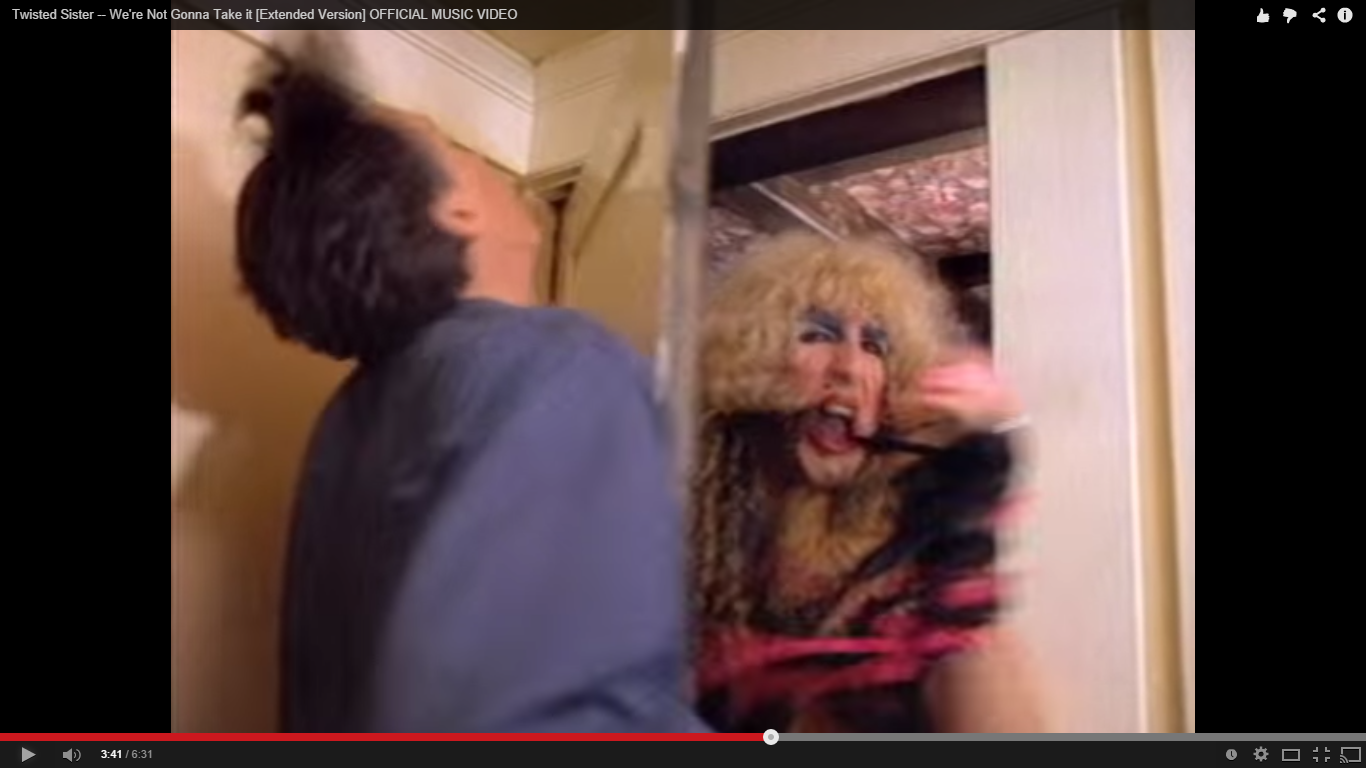 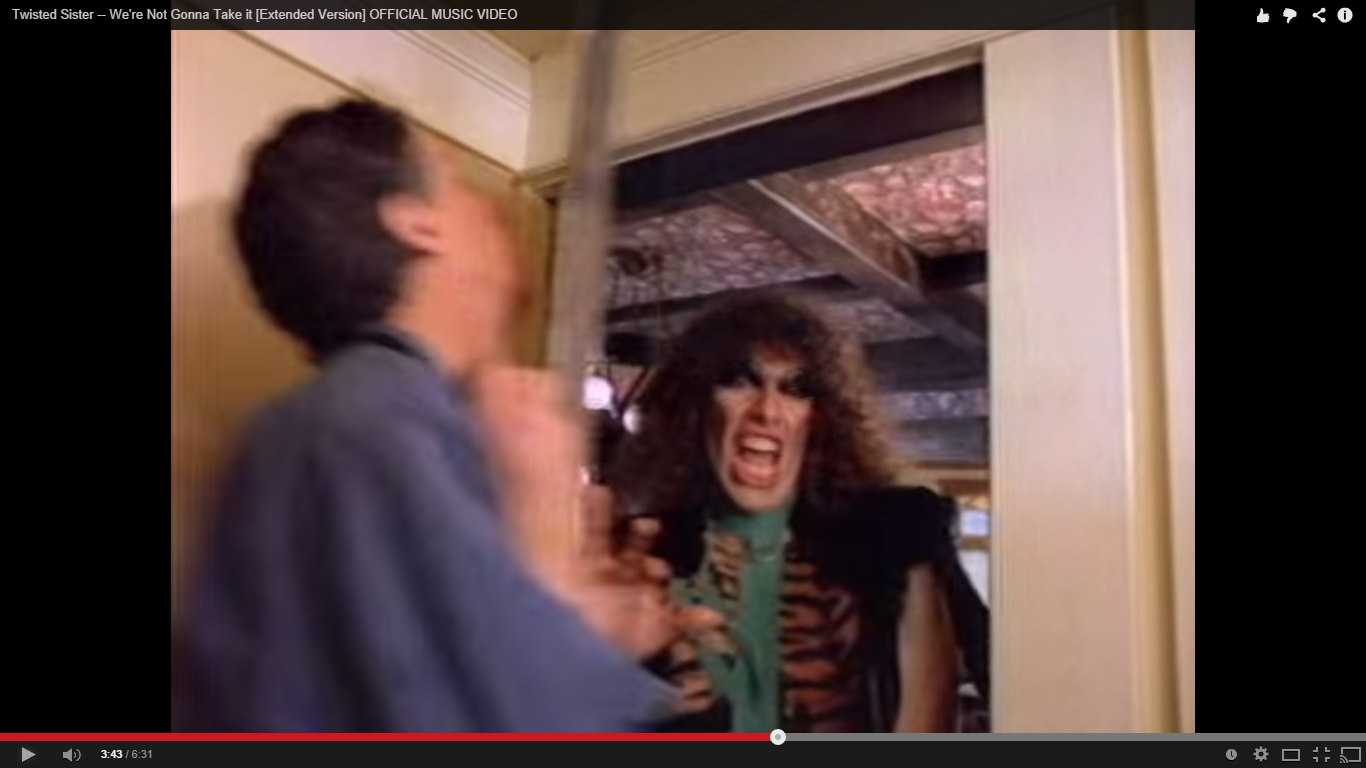 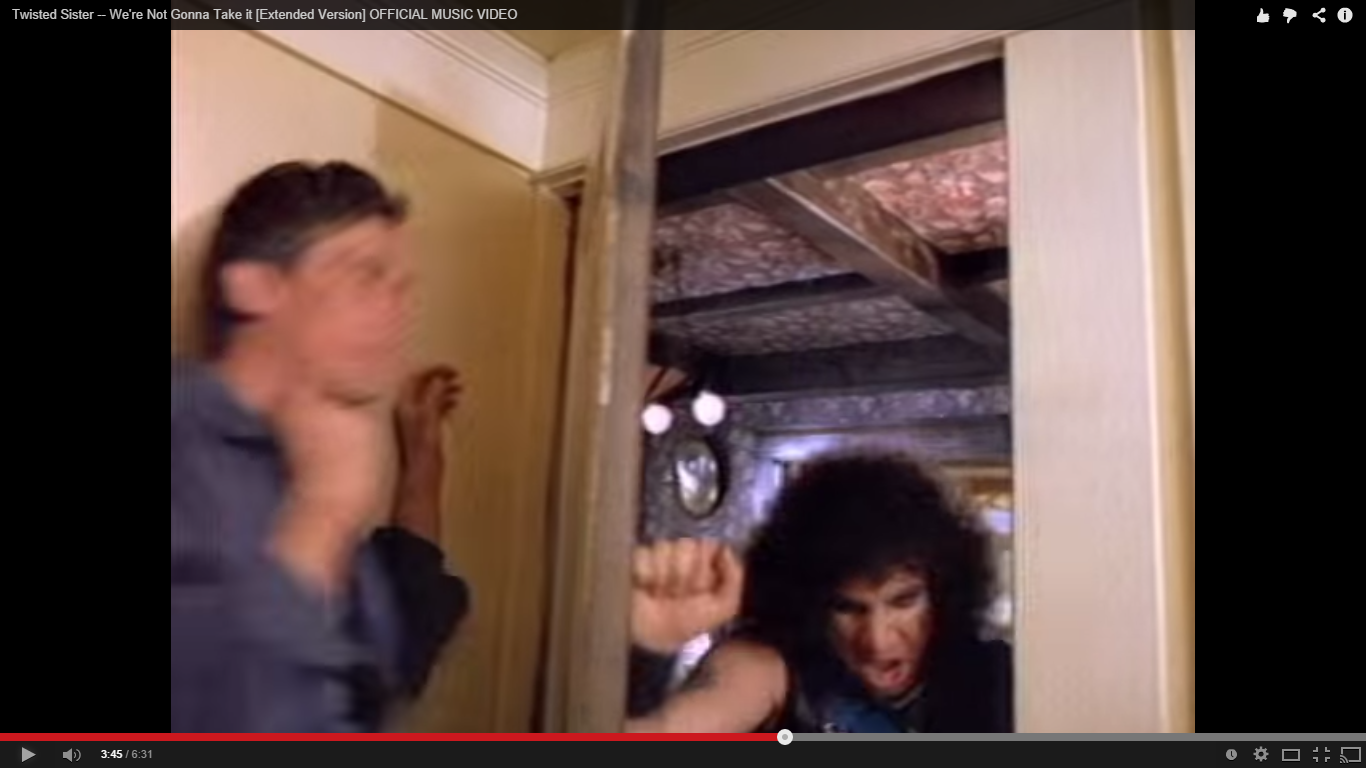 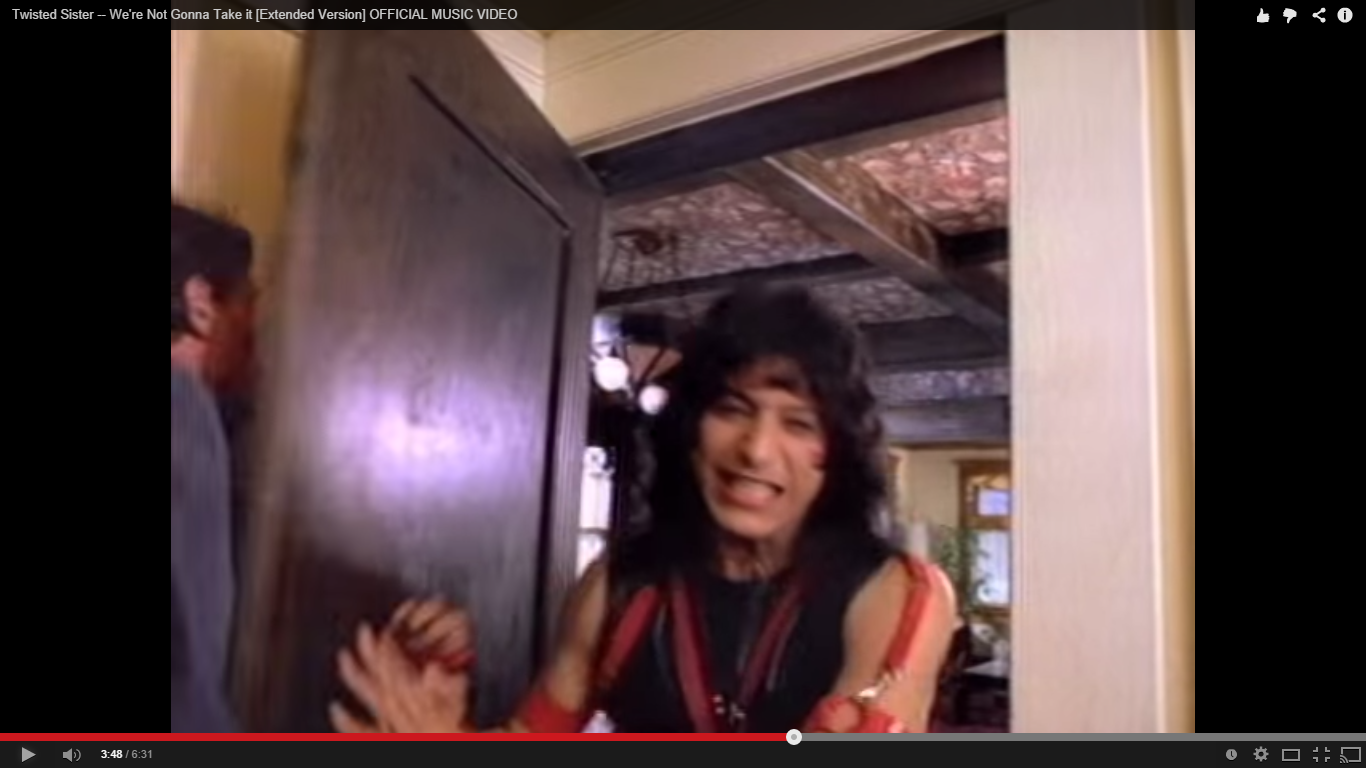 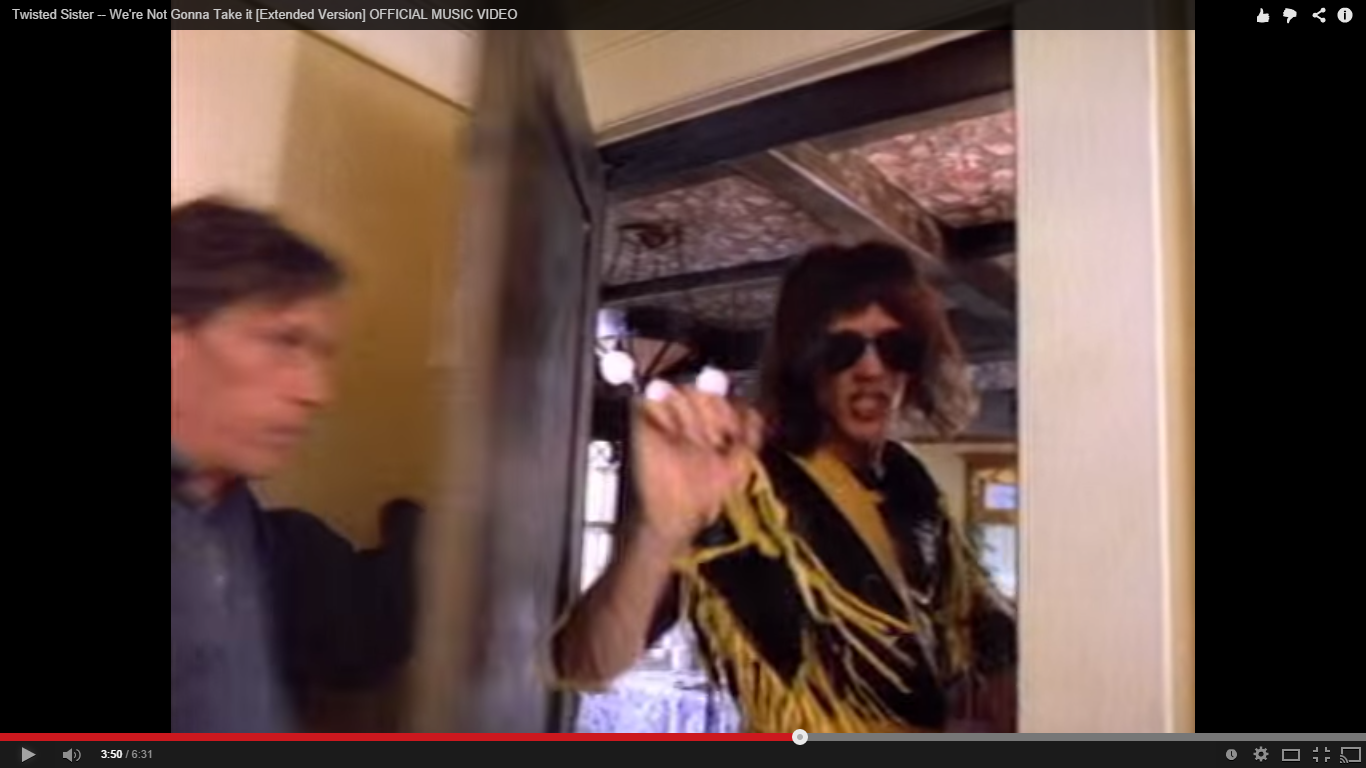 Dude, it's basic common sense that you shouldn't stand behind a door. No one expects that there'll be someone hanging out on the other side when they open one (well, except for my husband, who yells "Beep beep!*" before opening doors to rooms he knows I'm in).

So my verdict is that we can add bad visual comprehension to the PMRC's list of sins. Also, this video gives me hope that if I ever gain superpowers, my power will be the ability to turn into a massively destructive rock star whenever someone makes me angry.**

**This Buzzfeed quiz tells me that I'm secretly Axl Rose, so I'd say I'm off to a good start. My special abilities would include punching cameramen and inciting riots. Also, sexy dancing in tight white shorts.