You've probably heard this song before:


You may also have heard this one:


Okay, being a modern-day cowboy is a weirdly specific subject for not one, but two rock bands to write songs about. Still, it is only two songs, so it could just be a coincidence, right?

Except it isn't. After watching enough of these videos, I noticed just about everyone getting in on the Old West action--even the bands who don't flat-out sing about being cowboys dress up as cowboys, or have at least one video set in a sort of cowboyish location.

For instance, check out Ratt cosplaying as gun-slinging members of the Improbably Perfect Hair Gang for their "Wanted Man" video: 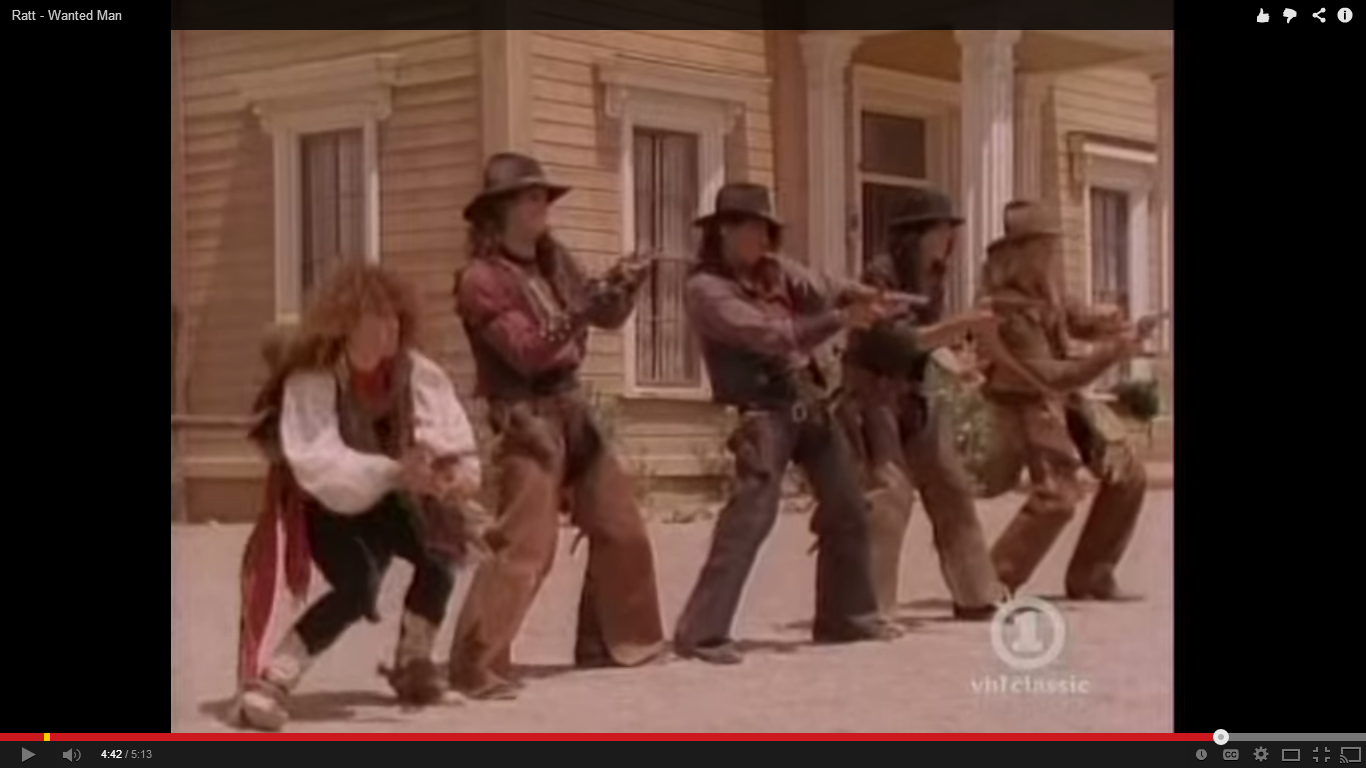 Meanwhile, W.A.S.P. frontman and obscenely hot guy Blackie Lawless doesn't dress up as a cowboy himself, but he seems awfully comfortable in the old-timey saloon setting of his "Blind in Texas" video, although the barkeep doesn't seem too comfortable with him: 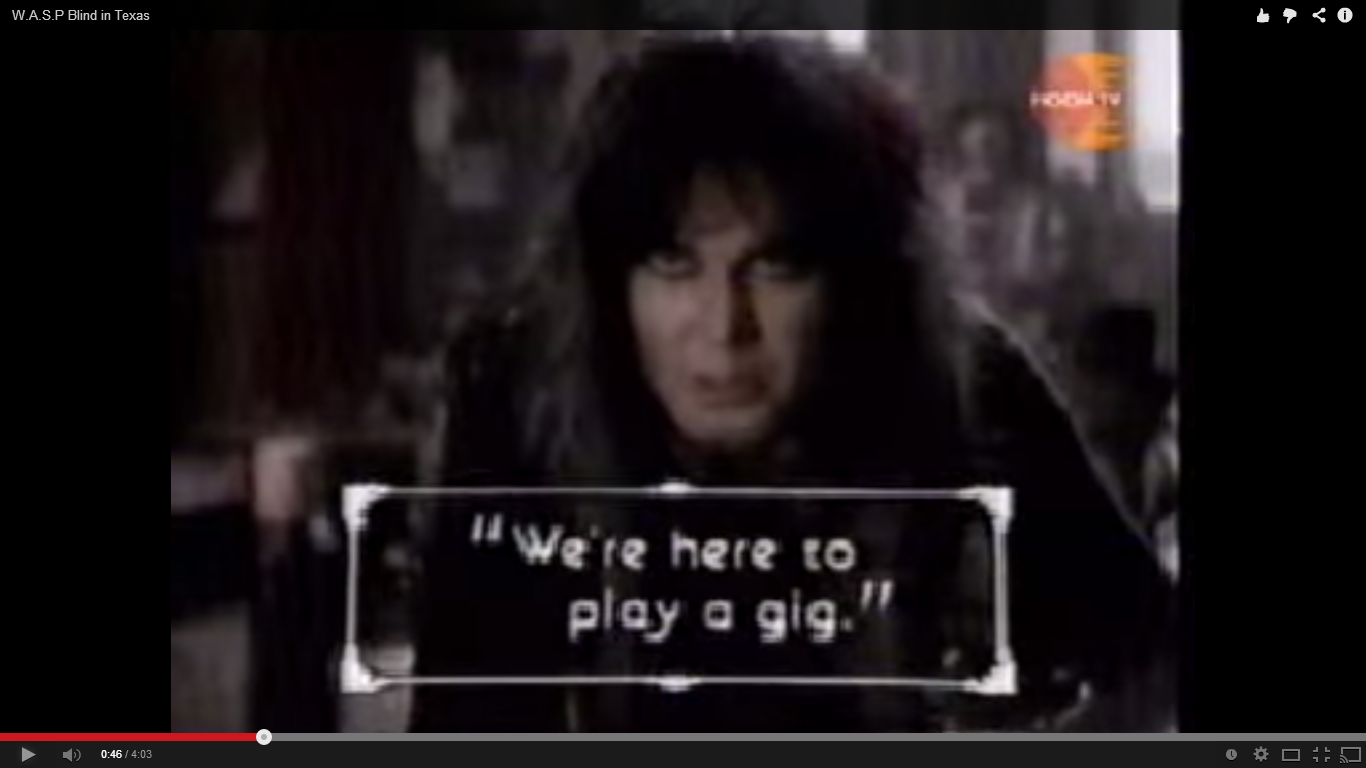 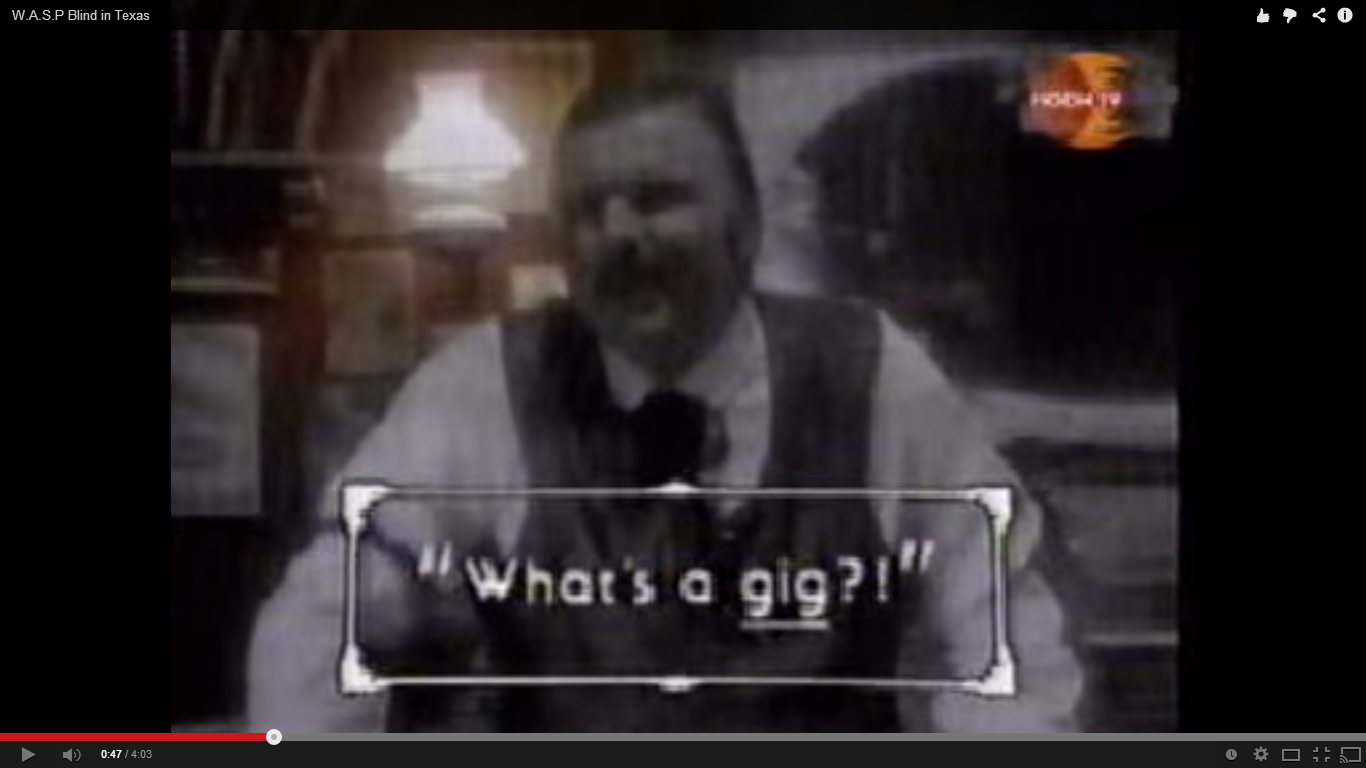 And how about that Van Halen video where cowboy Eddie Van Halen teamed up with his brother Alex/Tarzan and samurai Michael Anthony to save...an imperiled drag queen...from two...randy midgets in red catsuits because...uh...I guess there was a huge epidemic of drag-queen-molesting midgets in the 80's or something? 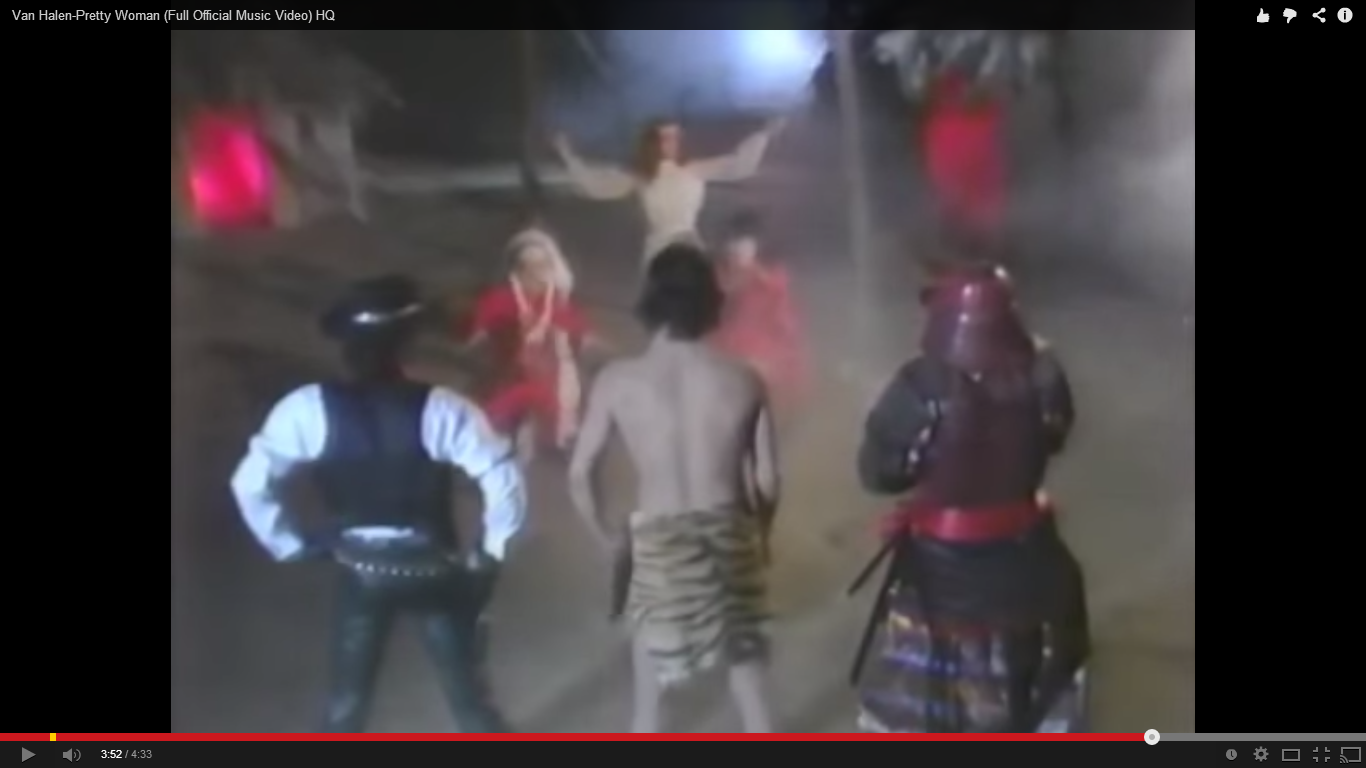 Also, David Lee Roth is dressed as Napoleon for some reason. 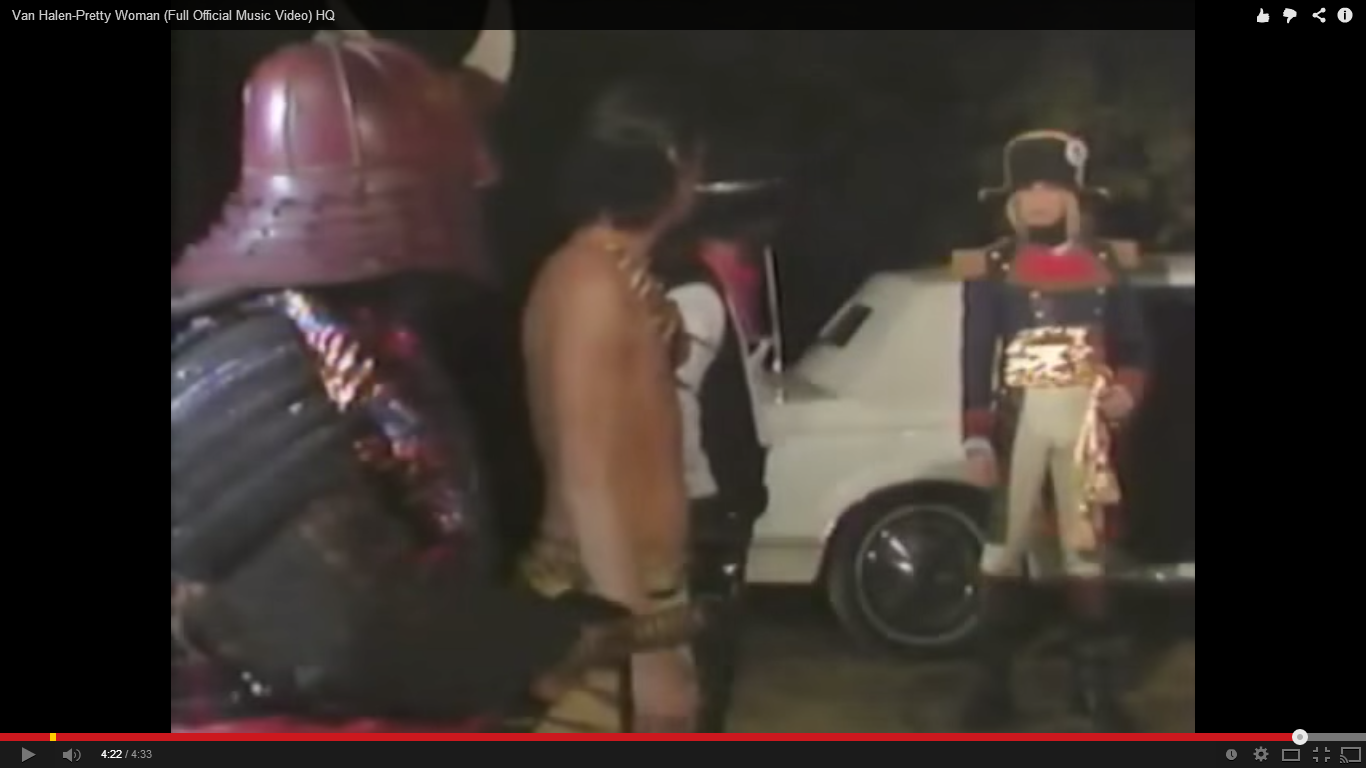 Anyway, moving on...my point is that cowboy and Old West-themed music videos were a thing in the 80's, and they were all over the place. And it wasn't just rock bands, either. Check out the official "Whip It" video, in which a member of New Wave sensation Devo assaults a frontier-cabin-dwelling pioneer woman with a bullwhip:


I see one obvious question here: Why cowboys? Why would 80's rockers latch on to this group of people who were mostly former soldiers who couldn't find work anywhere else and freed slaves fleeing discrimination in the South, were paid one dollar a day,* carried neither makeup nor hair dryers nor Aquanet in their saddlebags and probably attracted few if any groupies? Were they all just that nostalgic for old 50's Western flicks or something? Seriously, what is going on here? 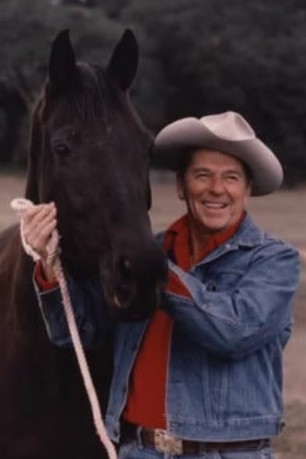 Yup, that's Ronald Reagan, in a cowboy outfit, on a horse.** And now I wonder.

I wonder if all these videos are products of the political climate of their time--sly bits of satire aimed at the optimistic white-picket-fence-and-apple-pie conservatism of the Reagan era. Could the Van Halen brothers be poking fun at conservative commitment to traditional gender roles while also subtly drawing attention to the administration's sluggish response to the AIDS crisis?  Maybe the Ratt video deftly turns the mythic cowboy image Reagan cultivated for himself on its head by returning to the older popular conception of the cowboy as a violent, dangerous outlaw. Perhaps when Blackie Lawless sidles up to that sharp-dressed, middle class bartender who doesn't know what a gig is, he represents the working poor who don't fit comfortably into the economic narrative of Reagan's Morning in America ideals, confronting the powers-that-be and demanding that their voices be heard at long last.

Or maybe I'm way overthinking this, and a bunch of 80's rock stars just all decided at roughly the same time that big hats and six-shooters were cool.

*In case you're wondering, a dollar a day was a pretty crap wage even in the nineteenth century. Adjusted for inflation, one 1875 dollar works out to about $21.74.

**I think it's worth mentioning that when I typed "Ronald Reagan on" into Google Images while looking for a picture of Reagan riding a horse, the first result the autocomplete tried to give me was "Ronald Reagan on velociraptor."