Once upon a time my younger brother was somewhat fond of Legos.  By "somewhat fond of" I mean "obsessed beyond the point of health and sanity with."  He amassed a small museum's worth of the things.

He also had a bad habit of leaving them scattered on every single flat surface in the house.  We were constantly finding Lego bricks under the refrigerator and behind the washing machine and piled up at the bottoms of random cupboards or stuffed down between the couch cushions.  Legos drifted into my and my sisters' rooms and burrowed into the carpet like little plastic scorpions, lying in wait for our unsuspecting bare feet.

They were damn good hunters, too.  I once buried a fully inflated dried pufferfish carcass under some junk in my room.*  It was there for two weeks, and I didn't step on it once.  But those stupid stealth Legos popped up and shanked me again and again, no matter how many of them I dug out of their hiding places and tossed back into my brother's room.  There was always one more.  Always.

To add insult to injury, I wasn't even allowed to derive any fun from the dratted things.  If I got bored and started trying to build something myself, my brother would freak out and start throwing more Legos at me, shrieking about the big awesome project** he was building, and how he needed that piece, that one specific green brick I had just used, which was identical in every way to the half a million other green bricks lying around the family room but didn't I know that particular brick was super special and he needed it and I was the meanest big sister in the world?

Oh, and don't get me started on the shitstorm that would ensue if you dared to take two or more blocks apart.  No matter how long they had been sitting in that configuration untouched, no matter how cast aside and forgotten they appeared to be, the resulting meltdown would fell mighty old redwood groves and kill strong men.

I was very glad when my brother grew out of his Lego obsession.  Of course he still yelled at me and gave me a hard time on occasion; he's my brother.  He's required to do so.  But at least it was no longer over little chunks of brand-new-Cutco-paring-knife-sharp plastic that could be hurled like shurikens when the argument turned ugly.

Anyway, fast forward a decade or so and here I am, all grown up and visiting my in-laws for the holidays.  I came downstairs this morning, feeling rested and content, and froze on the stairs as this sight met my eyes: 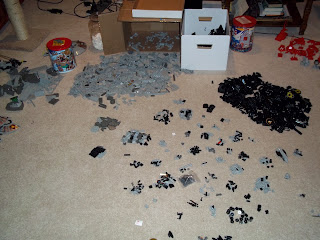 It seems that Technomancer and his sister lugged all their old Legos up from the basement while I was asleep.  As I type this, they're hard at work building a robot army: 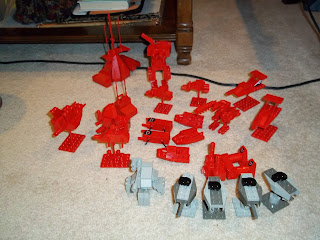 And now Technomancer is casually asking me if I might want to make a day-trip to a town about forty minutes away from where we live sometime.  You know, that one town that just so happens to have a Lego store.

Oh well.  At least Technomancer has the good sense to know that I'll stop buying chocolate for him if he throws Legos at me.

*I suppose it helps that I put it there on purpose.  I was hoping that a disliked babysitter who kept going into my room and messing with my stuff would step on it.  She did.

**I don't know if he ever managed to actually complete a big awesome project.  I certainly don't remember any finished ones.