Last year Technomancer and I decided to make a big batch of candied chestnuts as part of our annual Christmas cookie bake.  It was a fairly simple process:

1.  Measure out two pounds of chestnuts at the grocery store.  Decide it won't be enough for everyone on your people-to-send-Christmas-goodies-to list and purchase four pounds instead of two.

2.  Go home and mix up sugar, water and vanilla to make the syrup.  Soak the chestnuts in water and bake them to soften the shells.

3.  Start to peel the chestnuts.  Discover that chestnuts get very difficult to peel if they've been sitting out for too long.  Note that "too long" equals about four minutes.  Get progressively more frustrated as the shells get drier and clingier and the meat starts coming out in limp, pathetic-looking pulverized chunks instead of nice whole nuts.

4.  Toss the peeled chestnuts into the pot with the syrup.  Spend the next two or three days awkwardly moving the giant syrup-pot around the kitchen in a futile attempt to keep it out of the way.

5.  Get all sticky and slimy turning the chestnuts out onto parchment paper to dry.  Throw most of the giant vat of syrup away after realizing that you don't want to drink five cups of vanilla-flavored coffee every day for the next fifteen years.

6.  Get sticky again stuffing a million little paper dessert cups with chestnuts and trying to mold the pulverized bits into a halfway-acceptable chestnut shape.  Get them tinned and mailed out, and breathe a big sigh of relief.

7.  Go shopping the next day and discover a king-sized jar of pristine-looking pre-shelled chestnuts in the baking aisle.  Have a minor nervous breakdown in the middle of the grocery store.

This year we opted for the much easier option of ordering some from Zingerman's.  They're kind of expensive and they only come in packages of eight, but peeling them is so much easier: 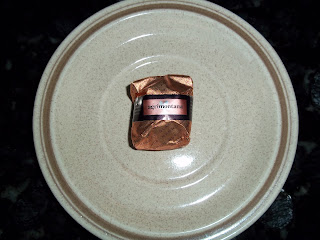 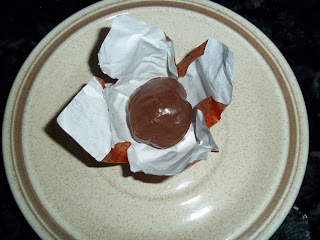 These are amazing.  The syrup forms a crunchy, crumbly crust on the surface of each one, and the chestnut itself has a smooth and meltingly soft texture, a little like the delicious squishy part in the middle of a cinnamon roll.  The vanilla does not overwhelm the more subtle sweetness of the chestnut, and they're not overly sticky.  Unlike some homemade candied chestnuts I know.