Today's Amazon Roulette offering hails from Germany (culturally at least.  The writing on the package it came in is German, but I don't know if it was actually made in Germany or not) and is loaded with calorific Christmasy goodness.

While I love to browse the Dean & Deluca website, I rarely order things from them because most of their stuff costs more than my grad school tuition.  Since the chaotic bacchanalia of rampant consumerism known as the Christmas season only comes once a year, however, I decided to get in the spirit and indulge myself a little.

The first thing that drew my eye to this peculiar seasonal cake was its unusual shape: 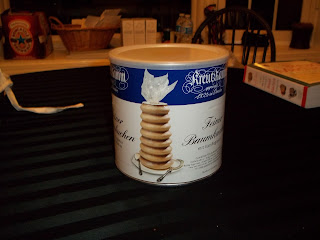 It looks like someone took one of those plastic-rings-on-a-spindle toddler toys and replicated it in cake form.

The list of ingredients sealed the deal.  Vanilla glaze, cinnamon, apricot jam, lemon peel and, best of all, marzipan.  Marzipan seems to be a pretty seriously underused ingredient in the pastry-maker's arsenal here in the USA, and I'd personally like to see more cakes made with it and have a more steady and reliable supply of such cakes.

My baumkuchen came in a tin.  That wasn't particularly surprising, but I was a bit unnerved to find that the tin featured this little dealie-o: 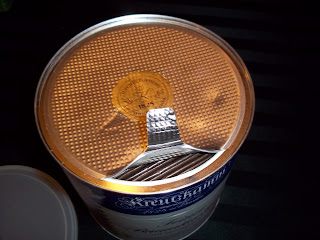 Somehow it doesn't seem befitting to the dignity of the "king of cakes and the cake of kings" to package it with a jumbo-jar-of-Planter's-peanuts-style freshness seal.  Oh well. Whatever it takes to keep it nice and moist, right?

This cake actually came with quite a bit of protective packaging.  Under the foil seal was a round of that corrugated paper stuff that they put on top of boxes of chocolates, and under that was a round of baumkuchen encased in thick plastic wrappings and another rolled-up swatch of paper.  Once I'd peeled them all away, the cake underneath looked like this: 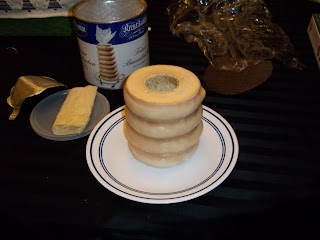 Not as tall or Christmas-tree-shaped as the picture on the tin, but still pretty fascinating.  It looks like a mechanical doohickey from a car belonging to the witch who lives in the gingerbread house. 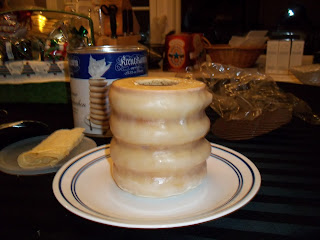 It wasn't quite that glisteny in real life, but the glaze did have a nice sheen to it.

When I went to cut this thing I discovered yet more packaging.  The walls of the hole in the middle were coated with some sort of parchment paper, along with this length of weird...semi-rigid...waxy...twine...thing. 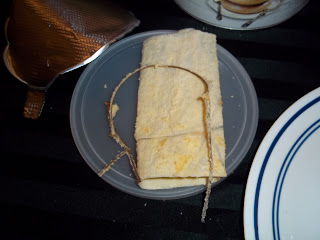 It doesn't look (quite) so disturbing in the photo, but I was very much not expecting to find anything like this in a lovely slice of cake of all places, so I was a bit freaked out by it.

Fortunately a consultation of Wikipedia calmed my fears.  It seems baumkuchen gets its unique shape from being baked on a spit, with the dough being brushed on in thin layers and each layer being allowed to "set" before the next is added.  The resulting layers resemble the rings of a tree, hence the name "baumkuchen," or tree-cake.  With that new info in mind, I would guess that they wrap the spit in parchment paper before baking so the cake won't stick to it, and the waxed twine is there to hold the paper in place.

That was a relief, but I realized it also meant I cut the thing wrong. 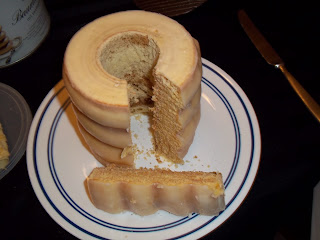 I was supposed to do it like this so the "rings" would show: 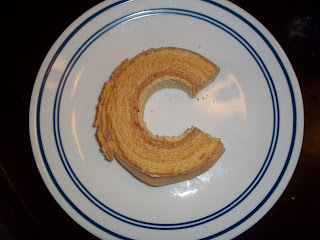 So...here's a slice of baumkuchen that looks like I pompously had it custom-made to resemble my first initial.  Or like it was baked by Stephen Colbert.  Anyway, you can still see the rings.

Carving mishap aside, this was quite tasty.  The glaze gave it a strong vanilla flavor, and under that I could taste a hint of cinnamon and the citrus tang from the apricot and lemon.  The marzipan was not as easily detectable, but I suspect that it was what gave the cake its dense, moist texture.  Overall, it reminded me of something, but I couldn't quite identify what.

Technomancer happened to be in the kitchen while I was eating it, so I offered him some.  He ate it and gave me a funny look.  I asked him if he liked it.

The king of cakes reminded me of a classed-up version of the humble Hostess honey bun.

That's not to say it wasn't awesome.  The baumkuchen had a much more pronounced and complex bouquet of flavors, the packaging was nicer, and I didn't have to go to a gas station to buy it from a surly clerk.

Also, at eighty bucks a pop, it isn't exactly a cost-effective solution for a recurring honey bun craving.
Posted by Lady Evil at 4:18 PM