Now that we've reached the halfway point of Michelle Remembers, I'm pausing to look back at what I've read so far and collect my thoughts about the (crappy, horrible) material.

One thought that's been pinging around in my head for a long time now is that Michelle and Dr. Pazder are both puzzlingly incurious about the nightmarish horrors of Michelle's past.

They are given plenty of opportunities to satisfy any curiosity that they might have. Michelle mentions a recent magazine article that supposedly confirms the existence of a witchcraft cult in the Victoria area. She has a first name for one of the cultists (Malachi), remembers that one of them apparently worked as a nurse at a local hospital, and that yet another came from Vancouver. She's been to their temple, which has some rather unique and memorable architecture. That's more than enough information to get some quality sleuthing done. But neither she nor Dr. Pazder goes to any public records building to look up people with the (relatively unusual, I would think) first name of Malachi, or describes the nurse to employees at the local hospital in case there are any old timers there who might remember having her as a co-worker. They don't drive around looking for the cemetery where Michelle was supposedly abused, or for the huge, hard-to-miss round stone temple where she was held.

Hell, they can't even be arsed to purchase the damn magazine.

True, Dr. Pazder does sort of make a half-hearted attempt at getting Michelle's hospital records, but he decides they've given him enough info rather prematurely.

From a logical perspective, this makes no sense whatsoever. Why on earth wouldn't they try to find more evidence than Michelle's word to back up that these horrific crimes actually happened? Those Satanists could still be out there committing atrocities. If you were in Pazder's or Michelle's place, wouldn't you want to stop them? Wouldn't you hit the streets and do as much research as possible, building up a detailed tome of names and places and the cult's structure, calendar, hierarchy, mythology and practices, so you'd have as much information as humanly possible to turn over to the police and help them put these monsters behind bars?

But Michelle and Dr. Pazder apparently don't want to do any of this, which is utterly baffling.

Until you realize that stopping the Satanists is not the point at all.

I recently came across this article about a bizarre unsolved murder from the 1970's. A young woman, Jeanette DePalma, vanished from Springfield, New Jersey, only to be found dead six weeks later. Her body had been dumped in a quarry, with branches strewn around it in what some observers thought were odd patterns. While police investigated her case over the next two weeks, rumors spread. The pattern of the fallen branches morphed into branches laid out in the shape of "occult symbols." Some people claimed that animal corpses, strung up from trees or stuffed into jars, had also been found around the vicinity of the girl's body. Some said that nearby trees had had arrows pointing to her resting place carved into their bark.

Talk of witches and Satanism wasn't far behind. Jeanette had been a sacrifice, people whispered. There was a secret witchcraft cult haunting the area, known as "The Witches" (Note to evil Jersey witches: please grow some goddamned originality.) and they had abducted Jeanette, either at random or deliberately because her devout Christianity made her a more desirable target, and slaughtered her in a secret ritual.

Is it any surprise that soon, almost all local residents were too afraid to talk to police about Jeanette's murder? They were so afraid, in fact, that the case went completely, irretrievably cold. Jeanette's killer was never identified.

This case is interesting, I think, because it represents the first rumblings of the Satanic Panic set off by Michelle Remembers. The book may have amped it up to the national frenzy level it eventually reached, but the basis for it was already there, churning, among other places, in the minds of people in small towns rocked by terrible crimes.

I don't claim to be a criminology expert, or even much of a psychology expert. I can't say for sure what exactly made the good people of Springfield so reluctant to discuss Jeanette DePalma's case. There are just too many rumors, and too little solid information. My guess would be that many people believed the witchcraft rumors and were genuinely afraid, and the rest didn't want to get involved for whatever reason.

Either way, it seemed many of these people feared they had something to lose by helping the police find Jeanette's killer.

I wouldn't be surprised if, for at least some of them, the thing they stood to lose was their belief in the witch cult.

Let's face it: We all secretly want monsters to be real. Even comedy websites know this. Rumors of murderous cults spring from this desire. Surely no one in Springfield wanted to admit that one of their own--a respected town elder, a clean-cut boy from the local high school, a kindly church lady--could have been the one to commit such a repulsive crime. And really, who could blame them? A heinous act committed by a member of a community is an injury to the soul of the community itself. It forces other members to face the fact that human cruelty isn't something that only exists in the monstrous non-people who infest that dark hinterland outside the bounds of "polite society," It's something that even the people they love and respect are fully capable of. Some people do realize this. Some will resort to all manner of complex mental gymnastics to ascribe their peers' bad behavior to some hated other.

I honestly think Michelle and Dr. Pazder didn't try to dig up any useful info on their "cult" for a similar reason. They were too invested in the excitement it brought to their lives, and in the thrill of being the stalwart heroes standing up for truth. Why take the risk of finding evidence to the contrary, and losing that wonderful high?

That's why I think Michelle Remembers is in need of a detailed deconstruction and beatdown. True, the book didn't create these beliefs and attitudes. But it enabled them, and (however briefly) gave them legitimacy in the world at large. The line of bullshit it was selling led, directly or indirectly, to more murderers and rapists going uncaught. All so its authors could hold on to their foolish angels vs. demons roleplay fantasy. We should hold them accountable for that. And we need to recognize the methods used, to make it harder for the next flimflam artist to suck us into an idiotic moral panic.

Rest in peace, Jeanette DePalma. You deserved a better community response, and a much more thorough investigation. 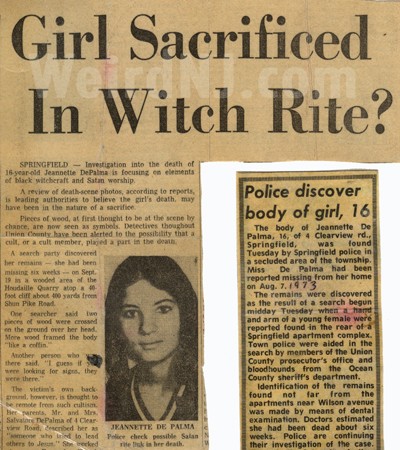