In chapter 12 of the worst book of the 1980's, the nurse takes Michelle to a building that appears to be a temple of some sort, and we see what appears to be our first full-blown Satanic ritual. Ready?

Michelle's description of the building isn't bad at all, from a storytelling standpoint. She says it was a round, fortress-like structure made of stone, with a dirt floor and either no windows or windows set so high up she can't see them. There are candles, a monolithic statue/idol of Satan dominates one end of the room, it's cold, and the place is infested with spiders. The writing still isn't the best, but all in all, it's a fairly eerie, evocative scene.

It's really too bad that, like everything else in this book, it just doesn't add up.

I was bored and playing with MS paint today. Here's a (very poorly drawn) artist's impression of the Satanic temple in Michelle Remembers, based off of Michelle's descriptions: 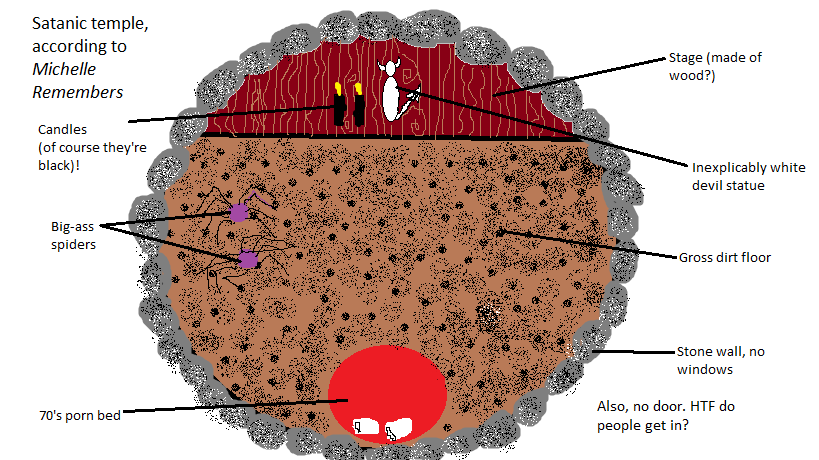 First off, there's a big honkin' bed in there. Michelle describes it in detail: it's big, round (could you even get a round bed in the 50's? That strikes me as more of a late 60's/70's design), and has satin sheets emblazoned with the cult's specific and distinctive 13-pointed religious symbol, which I'm sure they were able to buy off the rack at Sears and didn't have to special order at all. Her description is not, however, clear at all as to where in the room the bed is. And really, what are you supposed to do with a piece of furniture as unwieldy as a bed in the middle of a ritual space where people presumably need to move around to carry out their religious rites anyway?

Another thing--Michelle straight-up says this room has no door. This makes the bed make a little more sense; she's imprisoned in the room, so maybe the bed is there for her to sleep in. But this raises the question of how the adult Satanists are getting into and out of the room. Are they climbing through those windows that are too high up to see? That seems like a great way to lose most of your followers to broken necks.

Also, why is the devil statue white? That...is not a color Western culture generally associates with demons and hell. Okay, so maybe the cultists have some myth or symbolism specific to their belief system that explains the connection. Too bad Dr. Pazder hasn't made any attempt to discover anything about the cult's theology, despite supposedly having access to a survivor who understands the cult's inner workings. That might actually be interesting.

Oh, and here's a little pro-tip for anyone thinking of kicking off a moral panic: When fabricating your moral-outrage-generating story, pay attention to little details that can make your story that much easier to check out, like saying you were abused in a round room made of stone. Round buildings are 1) much rarer than regular square/rectangular ones due to being much harder to build and 2) tend to be highly recognizable historical landmarks. There can't be that many windowless stone towers in Victoria. I would think that if this building actually existed, Victoria natives would have been able to identify it from Michelle's description. Especially since it possesses the additional--and I would think highly unusual--identifying feature of having no doors.

Then we get to the ritual part, and...hoo boy, this book. I don't do many trigger warnings, but...

Michelle is held prisoner in this room for thirteen nights. Every night a man comes in and dismembers a white kitten in front of her, ritually smearing its blood on the statue. Michelle is horrified by this but is powerless to stop it.

At the end of the thirteen-night period, all the cultists come together in the room, wearing ceremonial robes and bearing more white kittens. While candles burn and organ music plays (damn, I've got to add an organ to my drawing too? How big is this place?) this happens:

Then Michelle got very scared, because they bent and took the kittens in their teeth, holding the cats by the napes of their necks. And then Michelle started screaming, because now they were biting the kittens, and the cats were howling, and they were pulling the kittens apart with their teeth, chewing at their paws to make them come free, stopping only to spit out hair. Then they rubbed themselves with the cats' blood, slowly, as they continued their catlike dance.

Scenes like this, I think, are a big reason for this book's success. There are certain subjects that just sort of...automatically flip off the logical part of most people's minds, in favor of passionate, white-hot moral outrage. Senseless cruelty to innocent, helpless things--particularly children and small cute animals--is a major one. This book does quite an excellent job of hitting those hot buttons. And once those buttons are hit, it's very easy for legitimate questions and doubts--could this really work in real life the way it's described? Why are they even doing this? What do they get out of it?--to be lost in the rush of OMG ASSHOLES KILLING KITTIES anger.

So let's take a dispassionate look at the situation for a moment.

First off, where are they getting the kittens? Thirteen kittens for the nights leading up to the ritual, plus one kitten apiece for however many cultists there are on the big night...adds up to a lot of kittens. Especially when you throw in the special restriction that they have to be white. (Again, why white?) I know the mid-twentieth century wasn't exactly a golden time for animal rights, but I can't imagine that even the most lackadaisical 1950's pet store owner wouldn't get suspicious if the same group of people kept buying him out of white kittens roughly the same time every year.

I suppose they could be picking up strays off the street, but that brings us to another set of problems. Cats can transmit certain diseases to humans. Feral cats that you picked up off the street are much more likely to be carrying those diseases, including rabies. Even if you dodge the rabies bullet (and you'd better pray you do, Michelle Remembers Satanists. If you get infected and miss the window of opportunity to get vaccinated against the extremely deadly brain-destroying virus before it takes hold, your only other treatment option won't be invented until 2004), that leaves ringworm and toxoplasmosis and random bacterial infections from getting scratched and bitten. Oh, and food poisoning from ingesting raw blood.

(New pet theory--the Satanists in this book behave so erratically because they're all in the late stages of crazy cat lady syndrome.)

Also, I'm pretty sure that this is a good way to break a tooth. The force of a human bite may be a lot stronger than we once thought, but our teeth aren't exactly built for crushing bone or tearing through loads of tough tissue. Humans aren't bears.

The chapter ends with Michelle throwing up on Malachi, which somehow screws up the ritual and lands her in deep shit with the nurse, who vows to "teach her" and I'm so sorry we had to slog through this. Here's some brain-bleach in the form of cats hilariously being mean to other animals for no reason: