I found a pile of those tubs 'o red-and-green candied cherries at the grocery store while I was shopping last week.  They were left over from Christmas and significantly marked down.  The pile was also quite big; it covered two layers of shelving, and the cherry-tubs were stacked so high on the top shelf that I had to stand on my toes to grab one.

Actually, I grabbed two--one red and one green--because I am self-destructive and very skilled at ignoring obvious signs of unpleasant things to come.

Once I got the cherries home I put off trying them for a week, choosing instead to contemplate the ineffable mysteries of the candied cherry: mysteries such as, "So who the heck keeps the candied cherry industry in business anyway?"  I know that they're a standard ingredient in fruitcake, and the tubs came with little label-sized recipe cards for candied cherry cookies and rice krispie treats with candied cherries pasted to them.  But those cards seem to be an updated version of those slapdash promotional "cookbooks" that food companies put out in the 1950's, where the sheer number of recipes some ad exec could cram the product into to prove that it was really versatile was way more important to the company than how the recipes actually tasted.  Also, I'm pretty sure I've never met anyone who's admitted to actually eating fruitcake.

Come to think of it, Technomancer is the only person I know who admits to having bought candied cherries at all.  He says that he and his mom used them one year to make "some kind of yellow cake that I think tasted all right."  He asserts that they taste better when mixed into something, but since it did not seem likely that he would be able to provide me with more details of the cake--we're talking about a man who forgot his own birthday several years in a row here--I resigned myself to the fact that I was going to have to try them plain.

I immediately regretted my decision.

I mean, look at these things: 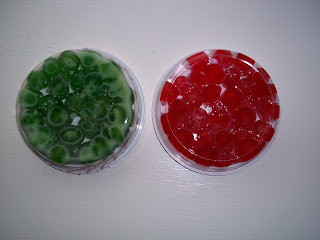 Have you ever seen so-called "food" that looked more like cheap plastic in your life? Also, I found the weird, milky-looking, congealed...stuff in the bottom of the tub with the green cherries very disturbing indeed.

I opened the tubs and selected a cherry from each, and my stomach immediately started to consider defecting to another body: 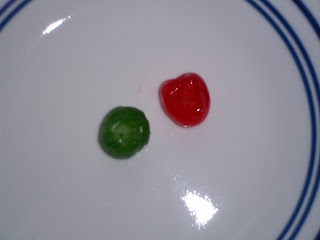 They were even more disturbing when viewed individually.  Translucent, slimy and unappealingly dry at the same time, and with a texture that I can only describe as what I imagine a none-too-fresh sliver of pickled human heart must feel like.  If it weren't for the puckered crater left on the surface of each cherry where the pit was punched out in the factory, I would start to question whether these were cherries at all.

It took me a full minute to work up the courage to eat them.  Somehow I managed to convince myself that it was too late to turn back now and took a dainty bite of the red one.

My entire mouth was instantly flooded with the foulest, most awful medicinal flavor it has ever been my misfortune to experience.  It didn't taste like cherries at all.  It tasted like really bad cherry-flavored cough syrup.  As if that wasn't bad enough, the disgusting slimy-dry fleshy texture felt a hundred times grosser once I was feeling it with my mouth instead of my fingers.

The green cherry was a bit better--which came as a surprise to me because the color of it is so horrifying and unnatural that I was expecting it to be much, much worse.  As it turned out, I had half made up my mind to eat the whole cherry before the cough-syrupy aftertaste kicked in and my entire digestive system shut down in protest.

So now I know exactly what I've been missing out on by not eating these classic holiday treats: absolutely nothing.  These are not fit for human consumption.  Hell, they're probably not even cherries.  I don't know exactly what they really are, but my bets are on a condensed physical manifestation of all of humanity's vilest sins.  Or Cthulhu eggs.  Yeah, I'm actually pretty sure that they're Cthulhu eggs.

On the plus side, I think I've figured out why fruitcake is traditionally soaked in rum.  See, while the alcohol won't kill the dark life stirring in these little globs of pure evil, it will get fruitcake eaters tipsy enough to dull the pain as dozens of unspeakable monster-gods burst forth from their ruptured abdomens to rain madness down on the world.  Though I doubt that anyone who equates eating a cake studded with sinister neon-green pseudo-food with a wholesome holiday activity deserves the consideration.
Posted by Lady Evil at 2:09 PM