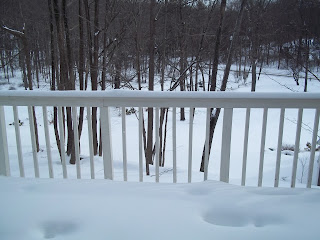 This morning I climbed a mountain to get my mail.

Before I explain that, let's go back a bit.  See, we here in the northeast United States are still recovering from the huge snowstorm that dumped two feet of cold white stuff on us this weekend.

I admit that there was much moaning and groaning in this household when the Meteorological Alarmist Squad* started reporting on the impending blizzard.  Technomancer got annoyed and stressed because he has a big work project that's already behind schedule due on Thursday.  I swore and stomped around a lot because it seemed almost certain that the storm would knock out our power, and I hate being without power with a white-hot passion usually reserved for politicians who think that women can't get pregnant from rape.  Unfortunately for us, hightailing it to Michigan to get out of the storm's path wasn't an option this time.  I went to the grocery store, grabbed up as many emergency supplies as I could carry, and hunkered down in the house with Technomancer to wait it out.

The storm came and went on Friday night, and miraculously we did not lose power for once.  But we still weren't going anywhere.  See that picture up there? Our driveway is buried somewhere under that smooth and unbroken lake of snow, and neither of us owns a Hummer.

The plow guy didn't make it to us until late Sunday.  In the meantime we kept ourselves amused as best we could; Technomancer played video games and worked on his project, and I started weaving a new piece on my loom and dug around in the back of my pantry to see if I had any weird or exotic food that I could try and post about.  There was nothing terribly unusual in there, though I did make non-alcoholic** Jello shots from some cranberry Jello and mandarin oranges I found.

Come Monday the driveway was finally plowed and I had no excuse not to bring in the mail anymore.  I threw on my big coat, struggled into my boots, and trudged all the way down our long, steep, winding and (at that moment) rather icy driveway, thinking uncharitable thoughts all the way about how cold and bulky and time-consuming and generally inconvenient a season winter is.

Our mailbox was half-buried under a big pile of plowed snow, which I had to clamber up to get to the box.  I worried with each step that the snow would give way and suck me in up to my not-snowpants-clad knees, but it was surprisingly firm.  And while I stood there, stooping to retrieve the mail while balanced precariously on a tower of snow with cars whizzing by, I remembered something.

Mid-winter in the early Nineties.  The parking lot behind the elementary school.  It's snowed more than usual that year, and the plows have piled it all around the edges of the parking lot.  We kids technically aren't supposed to play there, but the parking lot is in full view of the playground.  Those lumpy glittering mounds of pure possibility are too much of a draw, too great a force to resist.  I'm one of the first to sneak away from the swings and monkeybars.  The world reels away beneath me as I scramble up the sheer face of the tallest part of the pile.  Nothing can stop me.  I am a mountaineer charting a vast unexplored glacier in Antarctica,  a snow leopard prowling the ridges of the Himalayas.  I'm walking the thin edge of the ice-grey sky.

That's how it felt again for that moment as I stood on my little mountain of snow with cars zooming along beneath me.  All the little annoyances and indignities of living through winter melted away.  I was the Queen of Snowdrifts, looking down on my subjects.

Then, because the universe is a big asshole sometimes, it started pouring nasty cold rain on me.  I made a mental note to put alcohol in the next batch of impromptu Jello shots.

*The Weather Channel.  I used to like them a lot better, but they've become so weird and shouty and sensationalist lately.  If TV channels were people, I think the Weather Channel would be the stodgy and respectable banker who sustained a tragic brain injury that turned him into a psychotic rambling New York subway evangelist.

**I know, I know, they're not real shots that way.  But Technomancer wouldn't help me eat them if I put alcohol in them.
Posted by Lady Evil at 6:18 PM