Me:  I found these quail eggs at the grocery store.  Want to try one?

Technomancer:  (Looks at eggs like they're a bucket of rancid cat vomit.)  Ummm...why did you buy those?

Me:  Well...I've never had them before, and they weren't too expensive.

Me:  Hmm...probably not.  I don't think I could carry one out to the car by myself.

And so it came to pass* that Technomancer bowed out, and I ate the quail eggs all by myself.  But he didn't particularly need to bow out, because really, they're just eggs.

Really and truly.  The white has the same flavor and consistency as a chicken's egg white; I thought the yolk seemed creamier and a bit milder than a chicken's egg yolk, but the taste was still essentially the same.  The appearance of the things is what makes them so amusing: 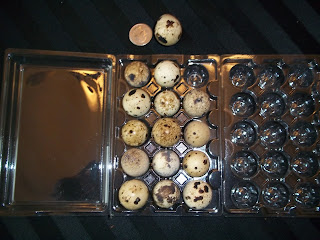 That's a quarter hanging out up there with the loose egg, for size comparison.

I was also quite pleasantly surprised to discover how well they match the countertops: 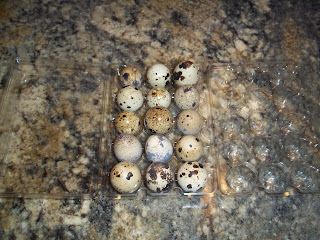 Preparation is pretty simple.  Basically you boil them for five minutes, and then soak them in an ice bath to stop the cooking process and loosen the shells. 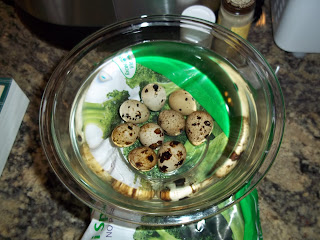 That's a bag of frozen broccoli under my "ice" bath.  I realized about three minutes into the boiling that there was no ice in the freezer.

These eggs have pretty thin shells.  I was a bit concerned about breakage when I first started handling them, but they held up pretty well, with only one (slightly) broken one out of a package of fifteen.  They also have a fairly thick membrane under that shell, which made peeling surprisingly hard and left me with very few peeled eggs photogenic enough to appear in the final illustration: 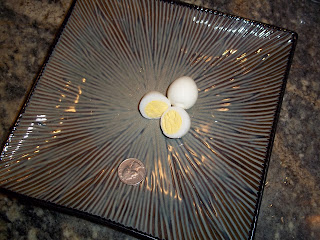 So what's the verdict?  Weeeellllll....I do love me a good hard boiled egg now and then, and these were delicious with a sprinkle of salt and freshly ground pepper, but there's a reason I've only ever seen a single quail egg on a plate at once, as part of a garnish to a fancy meal.  It's an awful lot of work for a payoff that's a mere third the size of a chicken egg and is easily gobbled down in a single bite.

On the other hand, the yolk seems to make up a more hefty percentage of these eggs' contents than a chicken yolk.  As someone who's been known to rescue yolks from recipes that call only for whites so she can boil and eat them, that's a very good thing indeed.

*I should probably just stop prefacing invitations for Technomancer to try something with statements like, "So I bought this on the internet..." or "I've never tried this before but it was on sale at the Asian market..."  It seems to put him on edge somehow.
Posted by Lady Evil at 11:19 AM