Yes, I know it's horribly un-American of me.  Yes, I know it makes me an awful person who probably, like, kicks puppies and throws little old ladies in front of speeding buses and stuff.  After all, who could hate something as fun and innocent as microwave popcorn?

But before you rush off to Walmart to buy some pitchforks, torches and witch-burning wood, hear me out.  The first time I ate popcorn was at my grandmother's house.  She popped it in one of those old-fashioned air poppers and seasoned it with exactly the right amount of oil: enough to make the salt stick, but not enough to make the popcorn soggy.  It was like eating a bowl of warm, puffy, crunchy, salty little clouds.

Then, a few years later, I dug into my first bag of microwave popcorn and immediately thought, "what is this slimy crap?"

Every time I've had microwave popcorn, it just tasted nasty to me--stale and slightly burnt-smelling even when it isn't burnt at all.  And that nauseating, overly salty melange of mystery chemicals that the kernels have been marinating in for who knows how long overwhelms everything and gives the popcorn a weird waterlogged mouth-feel.  Also, I suspect the manufacturers only call it 'oil' because the FDA would start asking uncomfortable questions if they told the truth and called it 'condensed smog monster urine.'

So I was intrigued when I saw Quinn popcorn for sale on the rather upscale Dean and Deluca website.  It was advertised as a spruced-up version of microwave popcorn with natural oils and organic corn, no chemical coating in the bag, and no preservatives.  It also came in three yummy-sounding flavors:  Parmesan and rosemary, lemon and sea salt, and Vermont maple and sea salt. 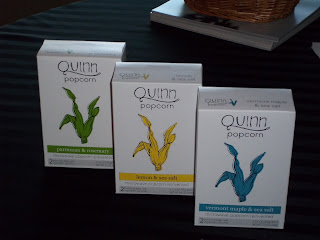 I couldn't decide which flavor I wanted to try first.  Fortunately Amazon.com offers a sampler package of all three for about fifteen bucks, so I ordered one and let Technomancer choose, since he so kindly offered to help with this one.

He chose the maple.  I opened the box with the blue stylized corn leaves on it and found this: 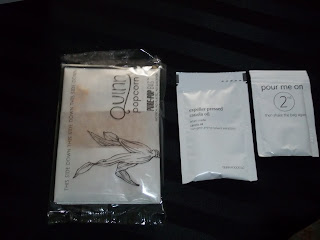 The plastic-wrapped bag is the popcorn itself; the packet immediately to the right is the oil, and the smaller packet is the powdered flavoring.  The popcorn bag has a pretty simple list of written and pictorial instructions once you remove the plastic and unfurl it:

Basically it says you're supposed to microwave the popcorn first, and then open the bag to add the oil and seasoning.  I guess that's a pretty good way of getting around the whole popcorn-kernels-stewing-forever-in-bag-of-rancid-oil problem.

It honestly didn't look like there was much popcorn in there, but the bag inflated nicely during the microwaving process.  Here it is about halfway through, looking kind of like grainy footage of a UFO: 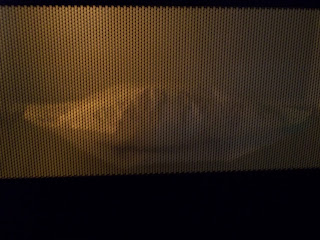 I was also a little worried about the oil-and-seasoning-adding process; the instructions said to dump them in and then shake the bag to coat, and the bag felt flimsy enough that I could see it tearing and splattering hot popcorn and oil all over my floor and bare feet, but it held up really well.  I also discovered that the contents of one bag fit nicely in my inexplicably huge cereal bowl: 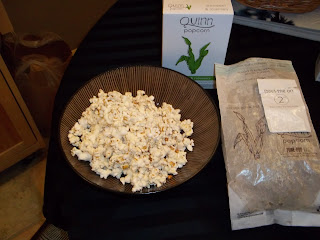 I'm happy to report that it tasted as nice as it looked.  The maple sugar gave it a nice buttery-smoky-sweet flavor underlying the saltiness, like a good sea-salt caramel, but not so strong that you couldn't tell there was popcorn in there.  Technomancer and I agreed that it was our favorite.

The Parmesan and rosemary was a close second.  The powdered seasoning didn't seem to distribute quite as evenly as the maple, but it was still delicious, cheesy, savory comfort food.

The lemon sits comfortably in third place.  It wasn't bad--it's still a few trillion times better than normal microwave popcorn--but we simply preferred the other flavors.  Also, it has a very intense lemony flavor, which also isn't bad but can be a bit of a shock when you pick up a piece with a little too much seasoning on it.

There were a few minor drawbacks.  The oil and seasoning packets make for more stuff to throw away.  Each box contains only two popcorn bags, and the bags are relatively small--which is fine for the two of us, but might be a problem if you're trying to provide, say, six people with popcorn.  All in all, though, it's definitely something I'll buy again, especially the maple and Parmesan flavors.  Heck, it's a nice, easy and quick microwaveable popcorn that not only doesn't taste like chemicals and sadness, but is actually so darn awesome that Dean and Deluca thought it was high-class enough to sell!  If that isn't enough to bring me back to the beloved American snack food fold, nothing is.
Posted by Lady Evil at 11:01 AM