Deep down in the soul of every human being lurks an irresistible urge to seek out pulse-pounding, adrenalin-gushing, blowing-a-big-wet-raspberry-into-the-grim-face-of-death danger and adventure.

Since I can't get the hang of breathing in a scuba mask, hate camping, and have no interest in becoming a NASCAR driver, I satisfy this urge by ordering random food off the internet and eating it.

A few weeks ago I was puttering around amazon.com's grocery section when I stumbled across white lotus seed mooncakes with 2 yolks from Kee Wah Bakery in Monterey Park, California.  What the white lotus seed filling tasted like I had no idea, but the picture made it look deliciously decadent and gooey.

Now, according to my extensive knowledge of cultures not my own (okay, a brief glance at Wikipedia), mooncakes are traditional fare of the Chinese Mid-Autumn Festival, one of the four most important Chinese festivals.  Lotus seed paste is apparently a delicacy reserved for special occasions and is considered the most luxurious mooncake filling.  Wikipedia also tells me that the yolk found in some mooncakes represents the moon, which makes sense, though it doesn't say anything about why these particular mooncakes have two yolks.  Maybe the other yolk represents some sort of mythological emergency back-up moon.  I don't know.  I had no idea what to expect from these mysterious confections I'd just plopped into my little virtual shopping cart. 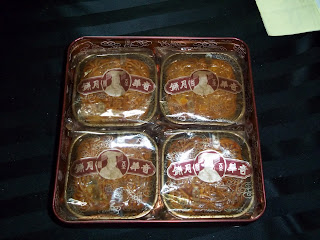 The mooncakes arrived in a very pretty tin with a stylized portrait of (I think) Confucius on the lid.  They were also individually wrapped. 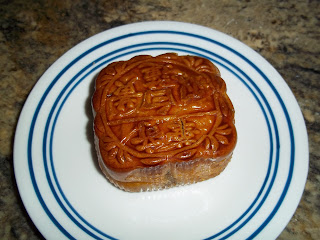 It took me several tries to accurately capture the shininess and intricacy of the decoration on the cake's pastry 'crust,' and I still don't think I quite managed to do it justice.  This thing wasn't merely beautiful.  It was exponentially beautiful.  I almost felt guilty poking a fork into it.

As for how it tasted, the pastry shell was flaky and vaguely yeasty.  Very much like a pie crust, if a bit thinner.

The moist, dense lotus seed filling was the most enjoyable part.  It had a nutty, subtly sweet flavor, with a slight potato-y undertone.  Sort of like if someone ground up freshly fried potatoes into high-quality marzipan.  Which kind of makes it sound disgusting, but it wasn't at all.  It was very good and I'd eat it again.  But marzipan-with-potatoes is the closest description of the blend of flavors I can manage.

There was some saltiness to it as well, but I think it may have leached from the two egg yolks.

Which brings me to the yolks. 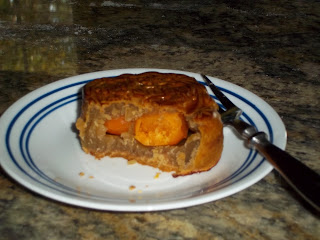 I didn't realize that the yolks were salted.  Maybe if I had known to expect this going in, I would have enjoyed them more.

Then again, maybe not.  A blend of salty and sweet can be all kinds of awesome, but not when the 'salty' end of the equation is a stale, vinegary egg yolk that's gone drier than Death Valley in a post-apocalyptic drought.  The crumbly mass dissolved into weird lumpy powder on my tongue and promptly sponged away all my mouth's moisture, forcing me to quit after two bites.  I think the yolk component of the mooncake is simply one of those foods that people who grew up with it love and look forward to, while people introduced to it later in life diplomatically refer to it as an "acquired taste."

Or maybe I chose too slow a shipping method and the yolks spoiled in transit.  Like I said, no idea what to expect from these.

On the bright side, I did eat all the lotus seed paste I could reach without touching any more yolk.  Plus, as I flip through the little menu of Kee Wah's other products that was included with the shipment, I see that they offer both white and golden lotus seed mooncakes sans yolks.  They also advertise such intriguing offerings as date paste, pineapple paste with walnuts, and, most interesting of all, mixed nuts and ham as possible mooncake fillings.  If they added the pineapple paste and a maraschino cherry or two to the ham one, they'd have themselves a special Chinese-American fusion Hawaiian mooncake.