In the early hours of December 3, 1984, a tank at the Union Carbide India Limited pesticide plant in Bhopal, Madhya Pradesh began to leak. The leak produced a massive cloud of methyl isocyanate gas, which caused widespread death and injury in the densely populated shanty towns around the plant.

There seem to be two accounts explaining how the leak began. The "official" one can be found on a website maintained by Union Carbide. The "Disgruntled Employee Sabotage theory" holds that some anonymous plant operator with an ax to grind deliberately attached a hose to the tank and pumped lots of water into it (MIC is very reactive with water) in order to ruin its contents, The other theory, the "Corporate Negligence" one, argues that the leak happened due to a catastrophic mix of lax safety practices, failure to maintain the facility properly and to replace worn-out equipment, and poor communication between the foreign managers and the native workers who ran the plant.

Honestly, I'm more inclined to believe the second one. The argument for sabotage by a disgruntled employee actually does seem fairly plausible, given that the plant's work environment didn't seem to be a particularly happy one, but I'm not sure how much I'm willing to trust it. It has a distinct whiff of corporate ass-covering about it.

However the leak started, though, the reality of its immediate aftermath is indisputable: mass deaths of people, animals and plants; human survivors overloading the local health care system, which was completely unprepared to deal with MIC inhalation at all, let alone thousands of cases of it; and an eventual mass evacuation from the area. 2,259 people died in the initial disaster, and some accounts estimate that up to 16,000 in total eventually died from gas inhalation or related diseases.

Now, let's move on to the really interesting (and horrifying) part of the story.

The Bhopal tragedy happened 30 years ago. As terrible as they are, the outrage associated with such tragedies tends to fade with time. You would think that Warren Anderson, CEO of Union Carbide at the time of the disaster, would not be popular in India, certainly, but also wouldn't be getting angry calls for his extradition to this day. 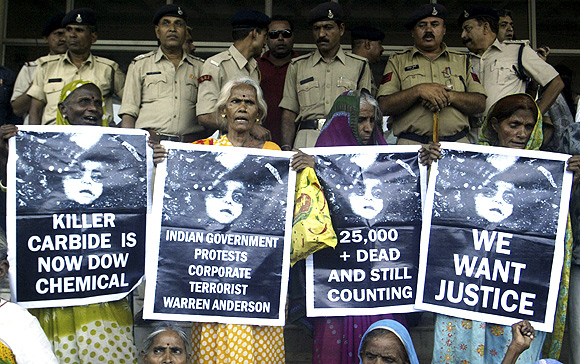 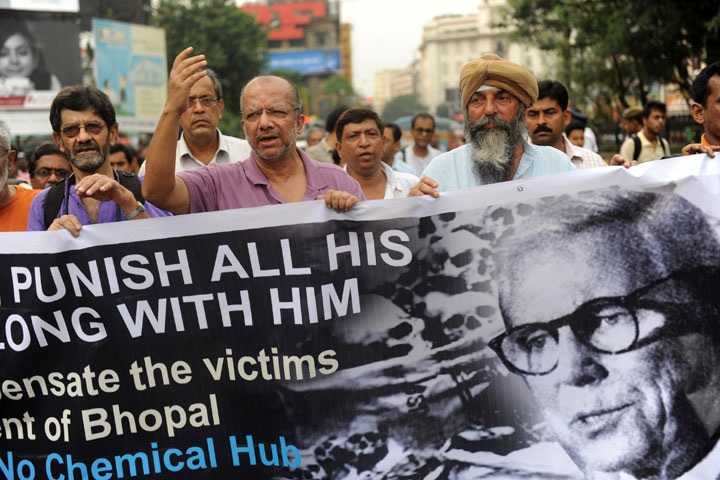 You may have noticed that the woman in the middle of that last picture, which appears to have been taken no later than 2007, is holding a sign equating Osama bin Laden to Anderson. Why is the anger and bitterness still so fresh, after all these years?

Probably because people are still being poisoned.

Fifteen years before the disaster, the people at that plant were burying literal tons of their nasty chemical byproducts in the ground around the plant or dumping it in "evaporation pools" that overflowed with every heavy rain, contaminating the soil and groundwater for miles around and causing painful birth defects and horrifically high child mortality rates.

And Dow Chemical (which now owns Union Carbide) doesn't seem to be doing a damn thing about it. Except for spying on activists who have advocated for the victims of the Bhopal disaster, which seems like a rather special level of sliminess and makes me glad that corporate personhood is just an annoying set of legal loopholes instead of a literal thing. I would not want someone as careless, callous and underhanded as that as a neighbor.

Unfortunately for the people of Bhopal, though, they had no choice in the matter.