In 1981, a band called Killer Dwarfs* formed in Ontario, Canada.

I note, with mild disappointment, that they are not actually dwarfs (either of the battle-axe-wielding DnD variety or the real-world little person variety). Nor do they appear particularly homicidal.

They do, however, know how to put together a delightful music video.


Now, sit back and relax as these fine gentlemen take you through the steps to surviving should you find yourself trapped in a feel-good 80's comedy about lovable underdogs bringing down an evil faceless corporation.

First off, you'll find yourself wronged in a big, humiliating way by your powerful enemy (in this case, Monster Records. You know they're evil because of the toothy monster mouth coming out of their decadent golden record logo. The 80's loved themselves some heavy-handed symbolism.) 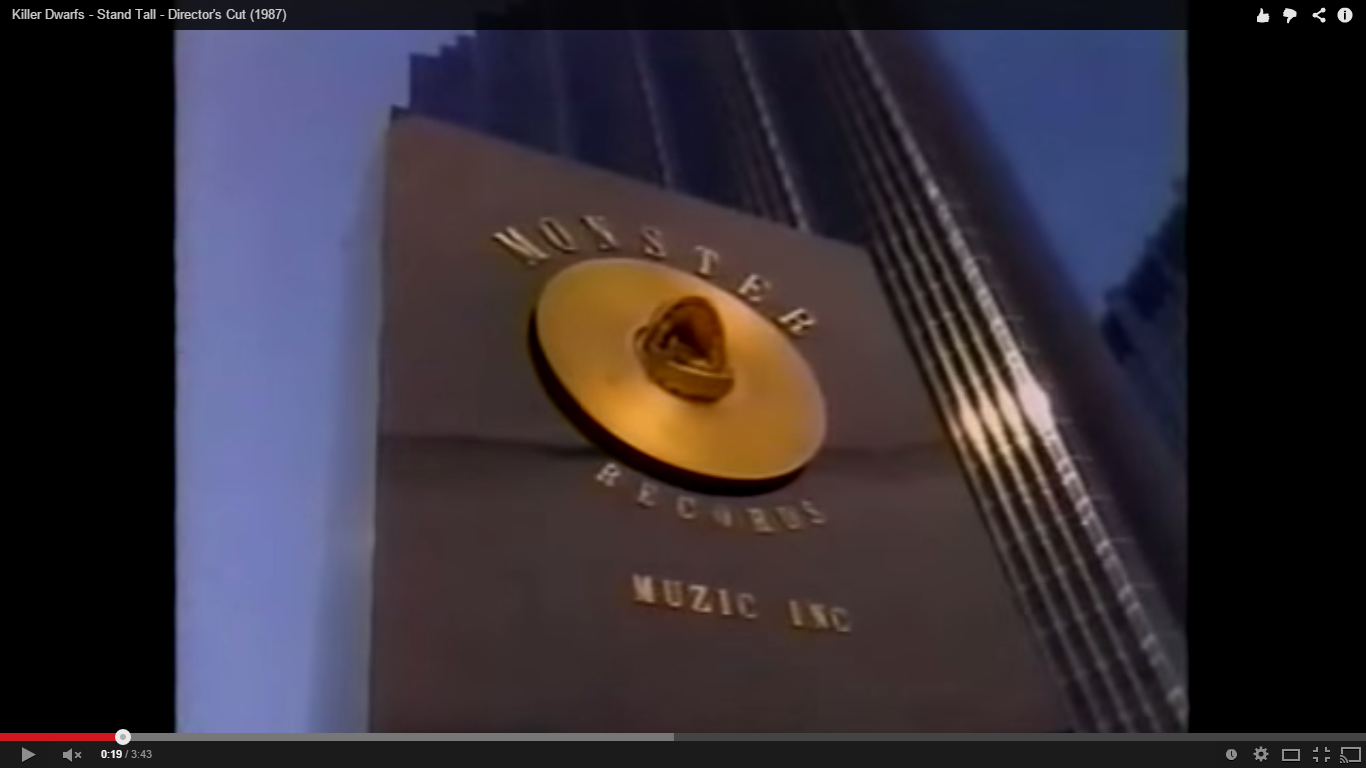 For our heroes, this wrong takes the form of them being thrown out of the building following (I assume) their attempt to get a recording contract. And I do mean that literally; the poor guys end up in a crumpled heap on the sidewalk. The 80's also loved them some seriously hardcore bullies. 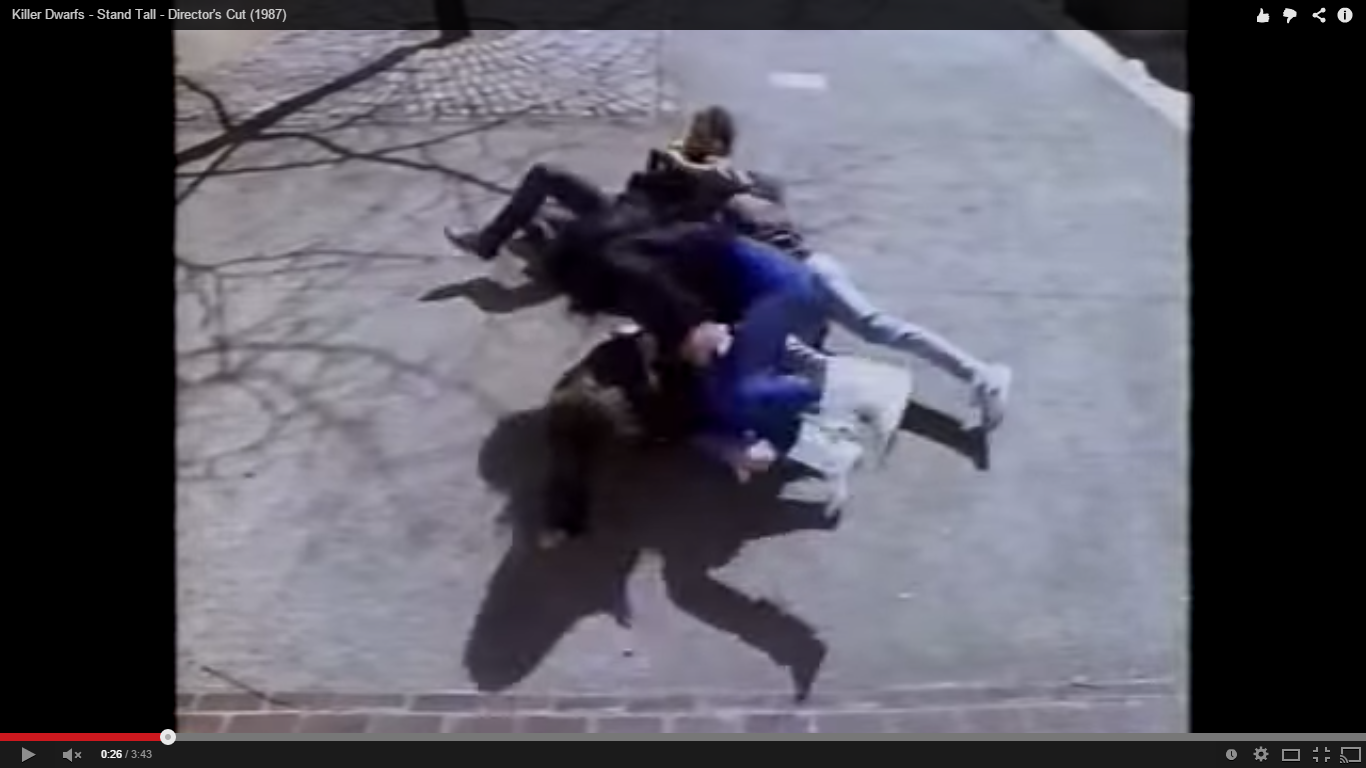 Once you've been wronged, you might strike a defiant pose and inform your tormentor, non-verbally if necessary, that you'll get back at them if it's the last thing you do. It'll do absolutely nothing to improve your predicament, of course, but it'll make you feel a bit better. Plus it's emotionally satisfying for your audience. 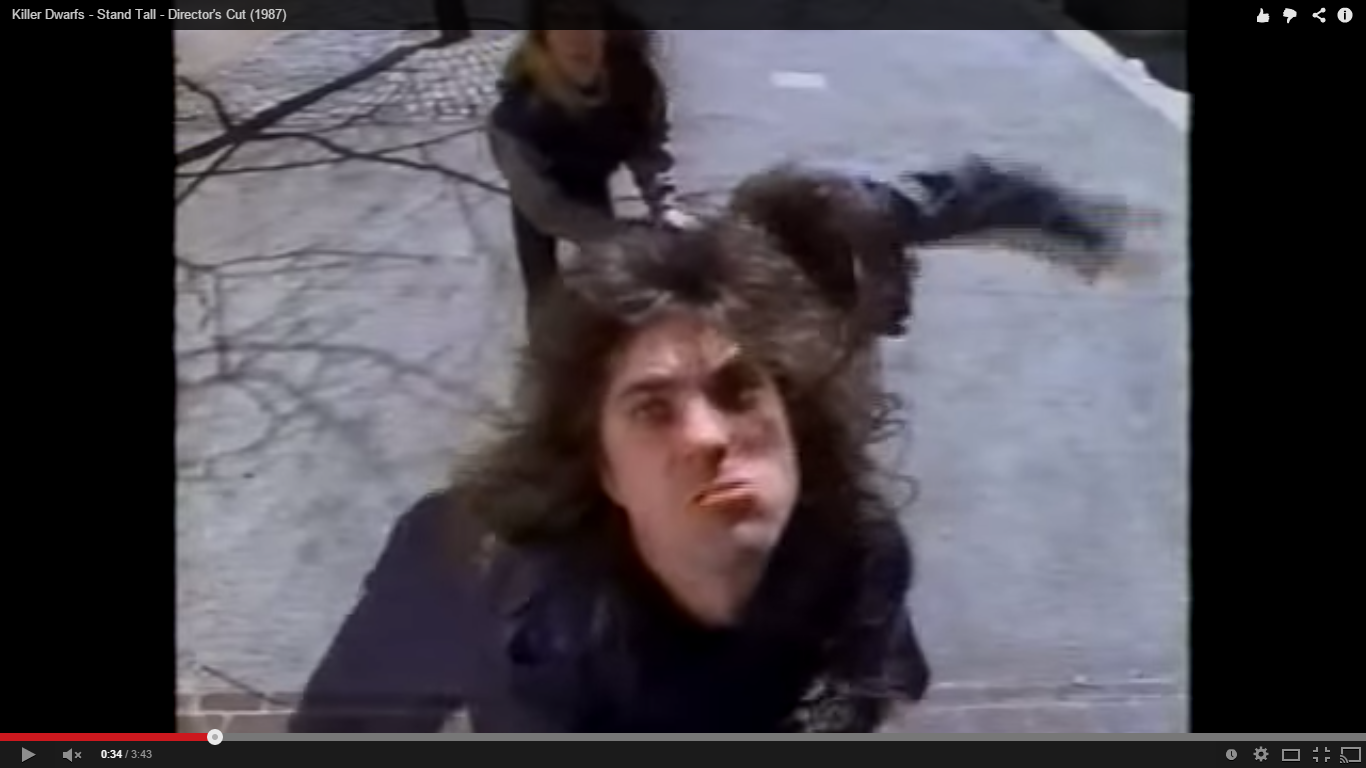 Then, having been pushed around and beaten down to the point where you're mad as hell and you're not going to take it anymore, the only thing to do is settle down and exact the only revenge you can in a wacky 80's underdog comedy: beat the bullies at their own game!

At this point, you may be wondering how Our Heroes are supposed to demonstrate an example of this step to us. After all, recording studios are expensive, and it's not like they can just go to their guitarist's mom's house and make a record, right?

Ah, but you forget that the 80's were also the age of MacGyver. It's amazing that any record company managed to turn a profit at all, considering that all struggling rock bands had to do to record an album was rig up an improvised home studio consisting of a single tape recorder and a small microphone mounted on a rocking horse's head. 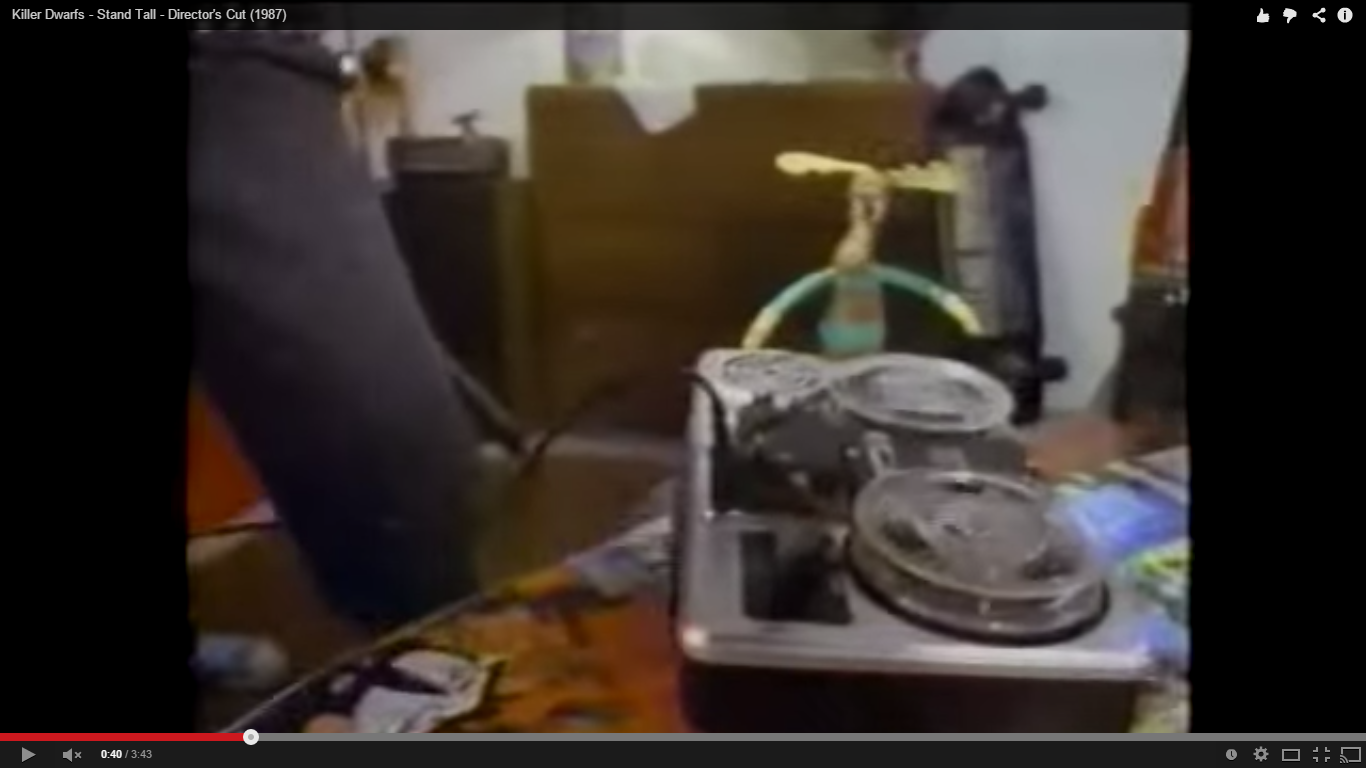 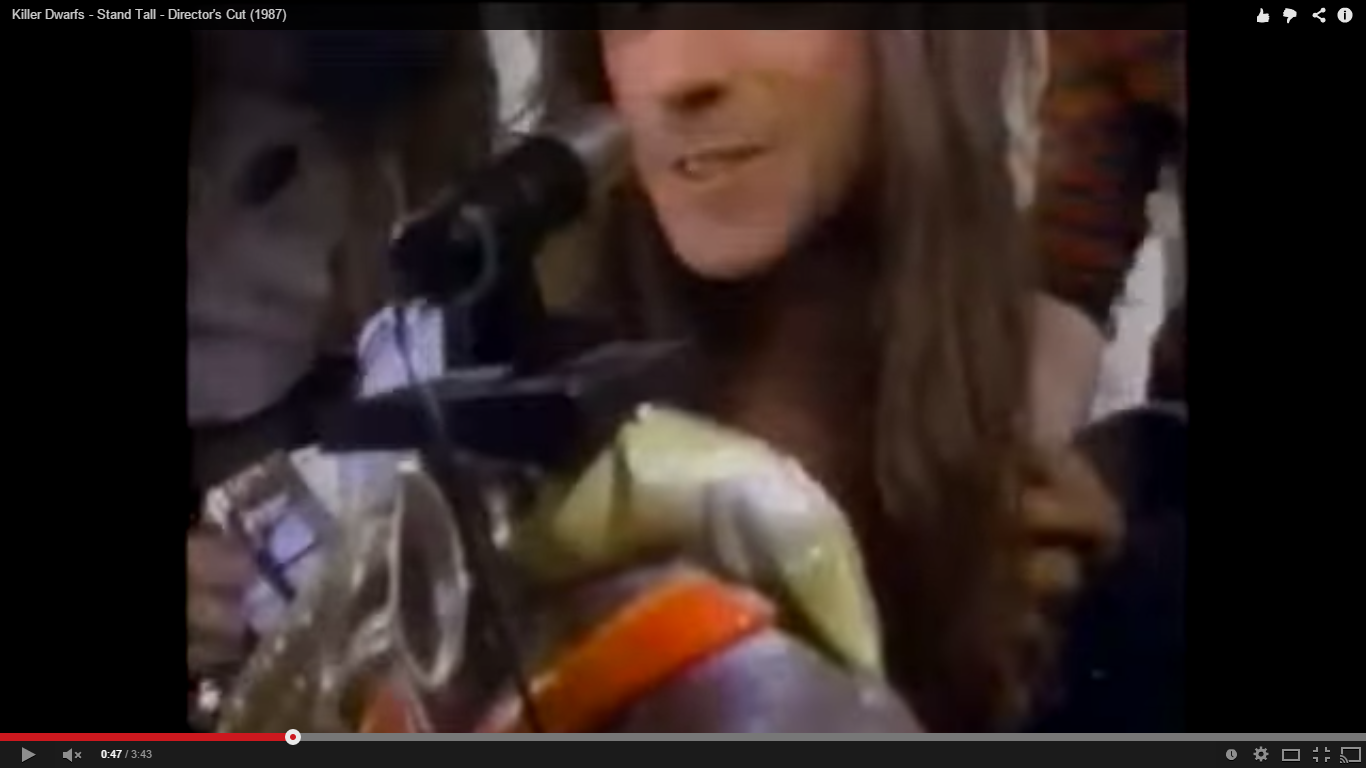 (Recording studios need soundproofing, you say? Oh, don't be silly. I'm sure they stuffed the walls with nice noise-absorbing Styrofoam peanuts before they started.)

And don't think that the fact that the recording on the tape has to then be put on an actual physical record is any barrier, because with a little teamwork and a few Goldbergian contraptions, these talented fellows can manufacture their own records too. They even melt their own vinyl on the stove** and transport it via pneumatic tube. 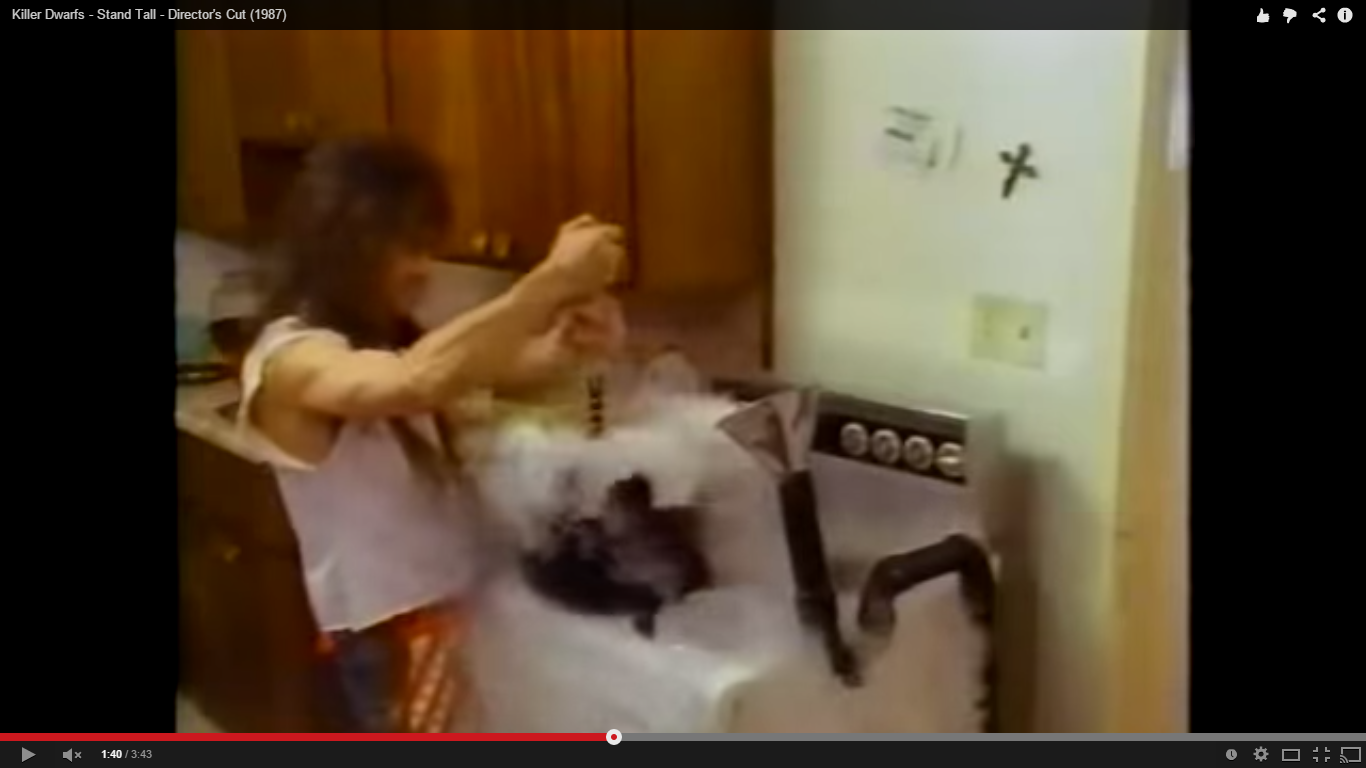 Album cover design? No problem! What they came up with is a little crude, but... ...they just pop the whole thing in the microwave and... 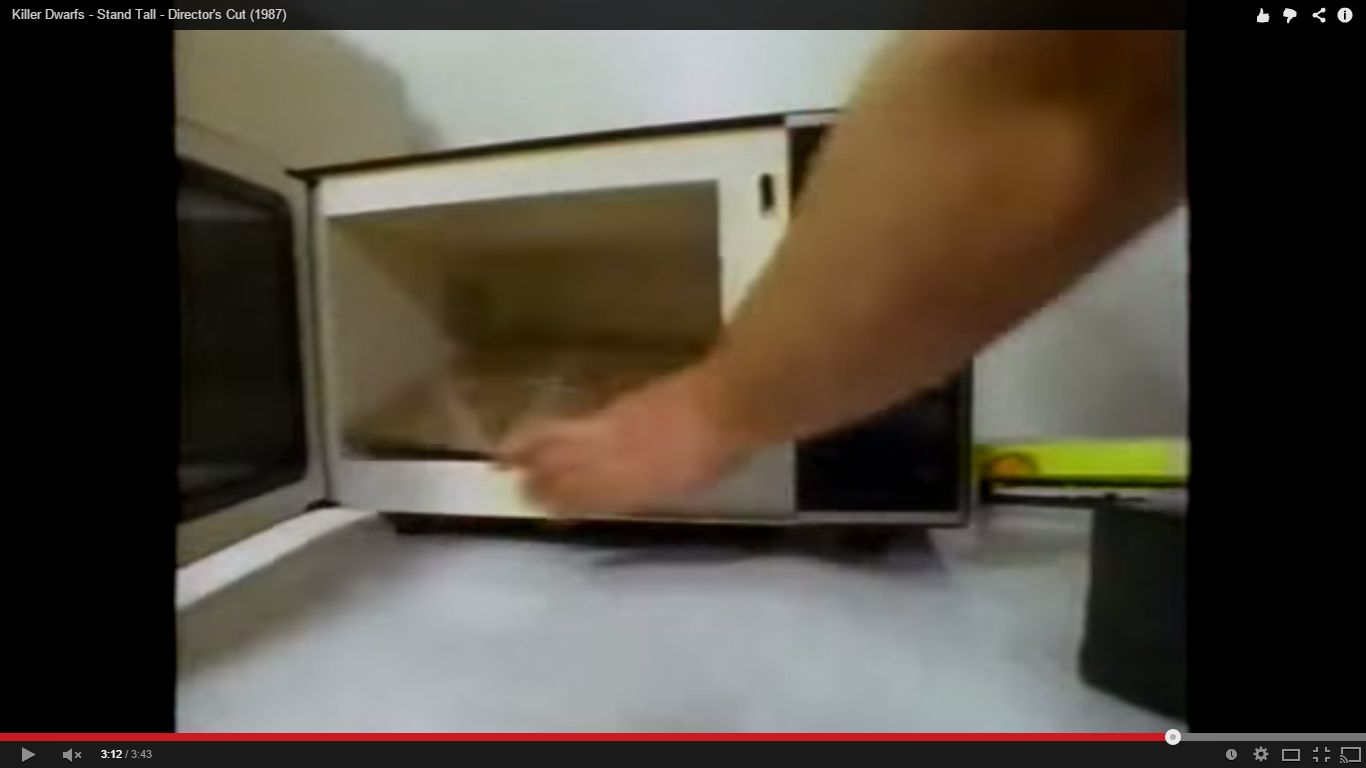 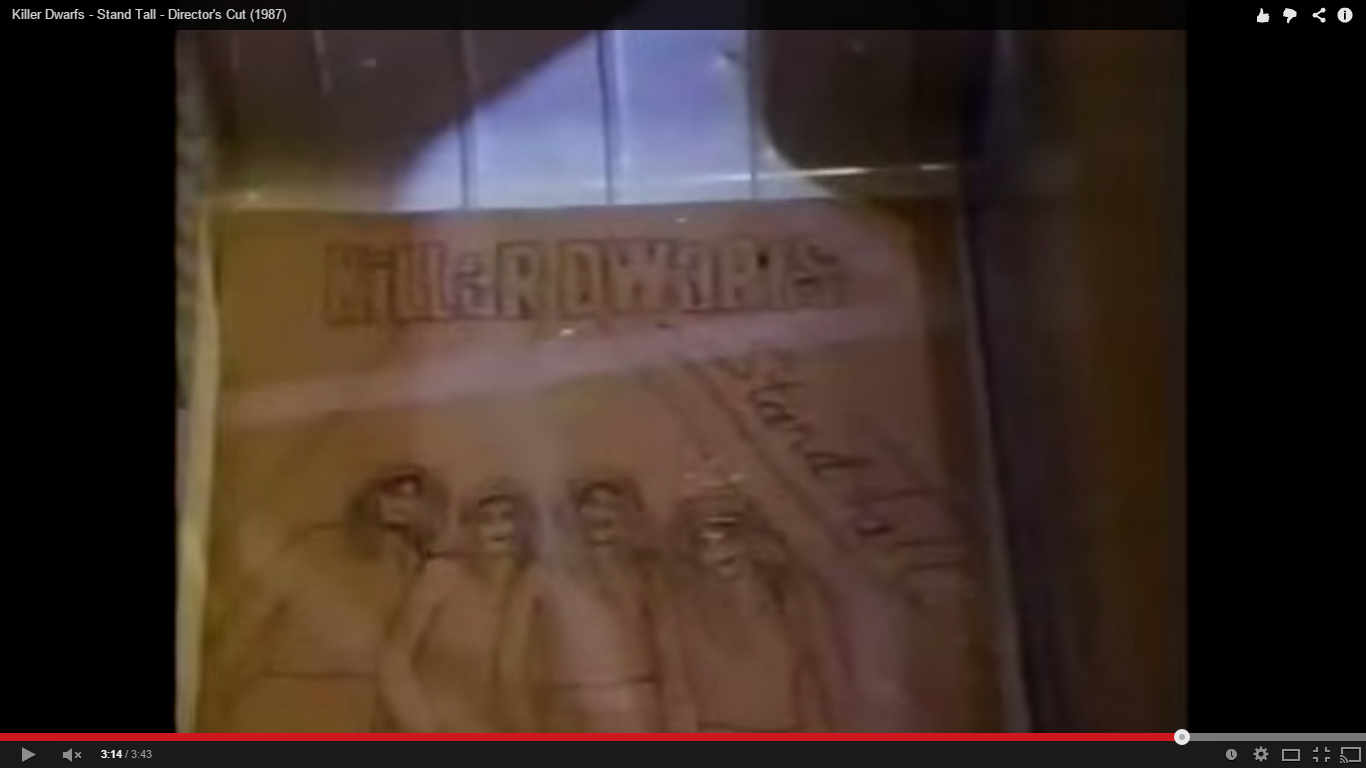 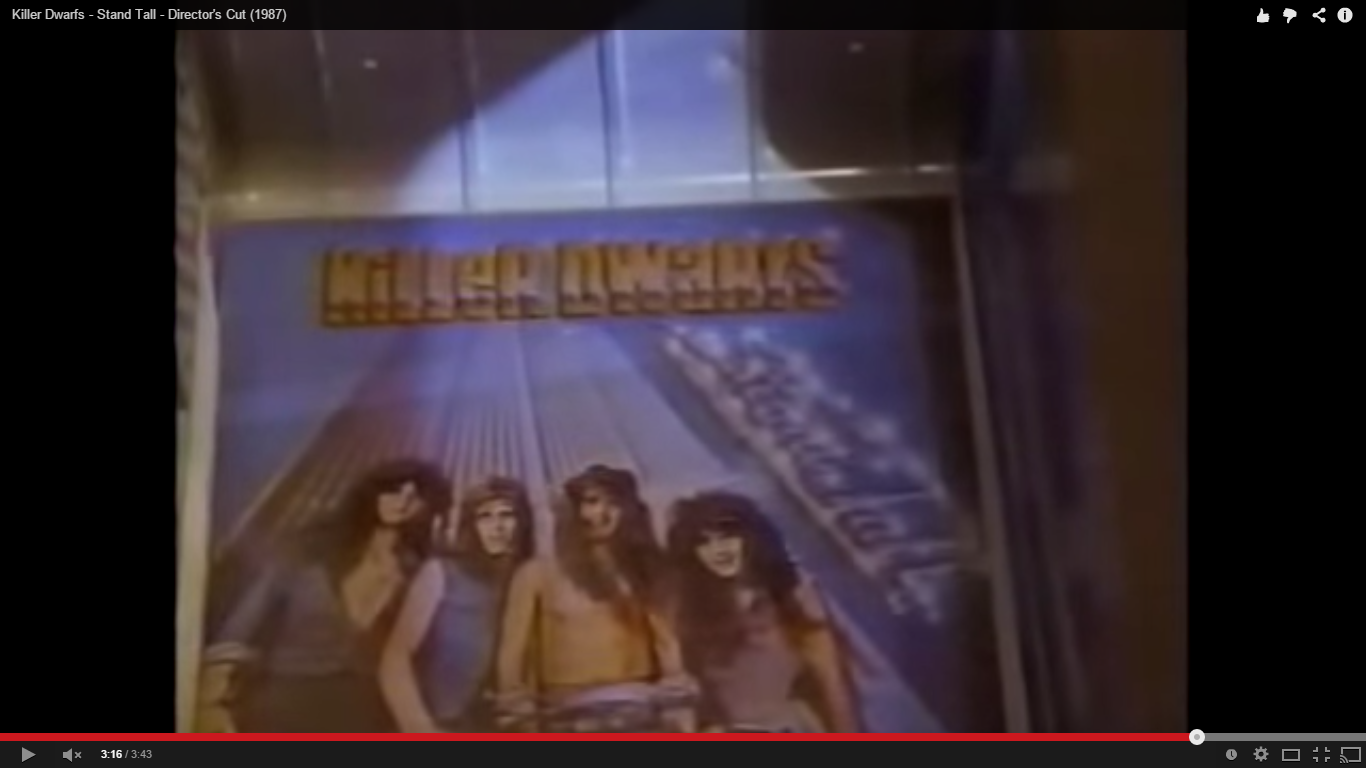 Uh...hey guys? Can I borrow your microwave next time I have a manuscript to finish? Nuking a stack of paper on the "magic" setting for two minutes just seems so much easier and cheaper than hiring an editor, a proofreader, a formatter, and a cover artist.

Actually, by the end of the video, I'm kind of questioning who the underdog is. The band has magic technology that lets them create professional-grade records from random junk lying around their apartment (I guess they were only trying to get signed to a record company to save themselves some work) and fans are rushing stores to buy their album while the record company ends up crumbling and defaced by Killer Dwarfs-related graffiti. That's the one big pitfall of the whole underdog narrative; once your underdogs stop being underdogs, they might take the place of the bullies they defeated if you aren't careful. 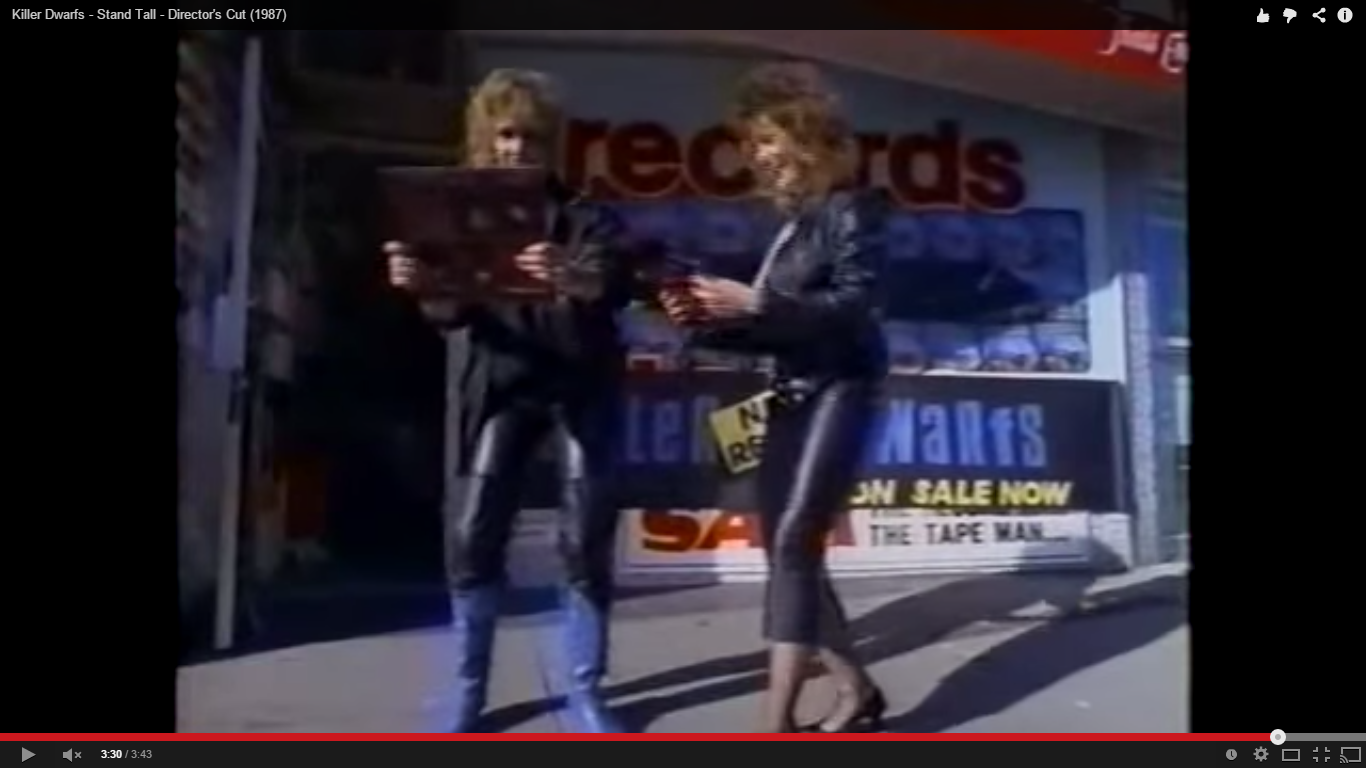 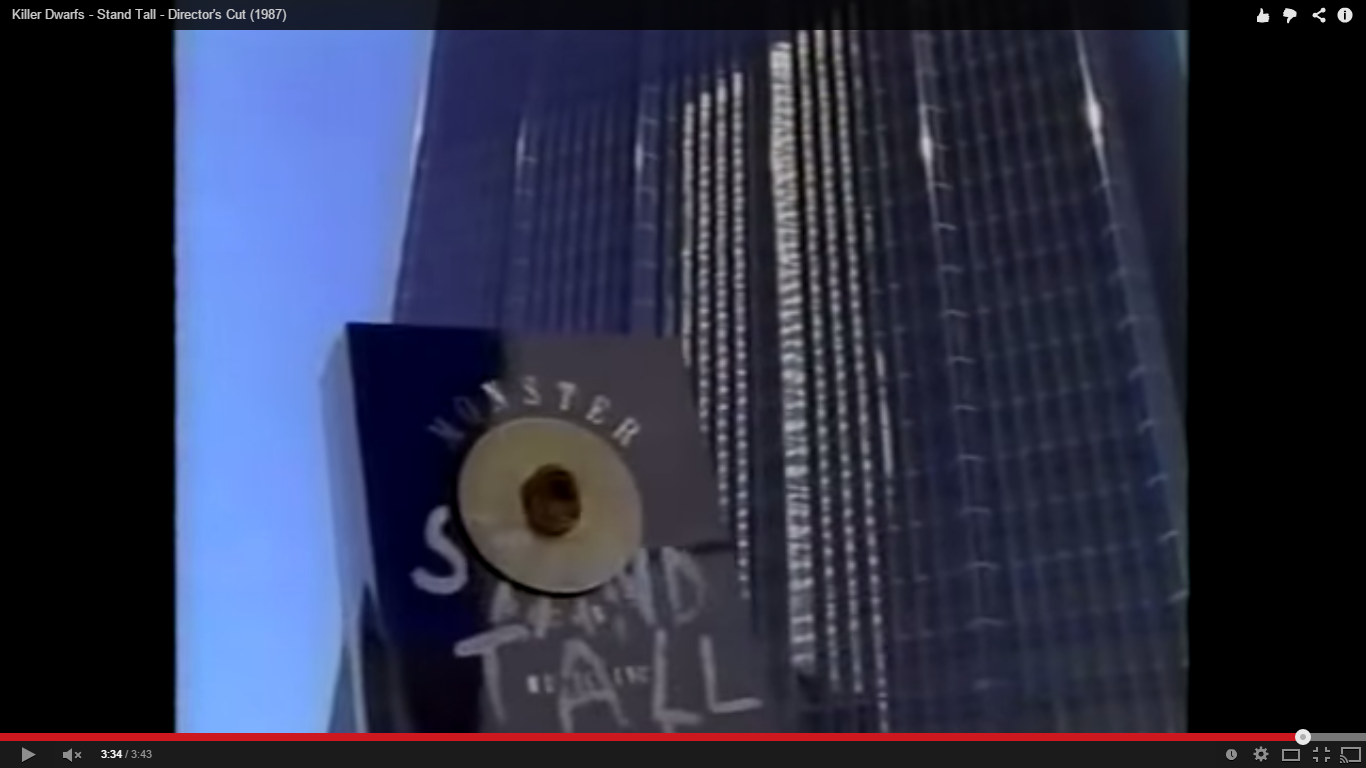 Then again, the record company did commit the unforgivable crime of spelling music with a Z. So I really can't feel particularly bad that they were defeated by some MacGyver tech and an upbeat 80's montage.

*Also spelled KiLLeR DWaRfS, apparently. Sigh. At least they keep the letters in the right order.

**Apropos of nothing, I found myself kind of curious about whether this was actually possible. According to my research, vinyl has a low enough melting point that you can apparently make a crafty set of decorative bowls from unwanted old records in an oven heated to 200 degrees, so I suppose it could be. I doubt the process actually produces cool dry ice smoke as a side effect, though.

By the way, if you'd like to know how vinyl records are made without the use of enchanted microwaves in real life, here's a video.