Sorry, sorry. Tax week + trying to force myself to read more of the worst book of the 1980's for future blog posts = frustration, inaction, and deep, terrible, pitch-black hatred for all living things.

But my taxes are done and turned in and we've only got a few chapters to go, so let's just plow ahead and finish this shitheap. I've got a major treat in store for after we've finished it, I promise.

So. On to the nonsense. As the chapter opens, Dr. Pazder is setting up various video cameras to record Michelle's next session. He also thinks he's got the whole Satanic calendar figured out based on a combination of the incredibly vague, shaky details Michelle fed him and "facts" that Father Guy and "other authorities experienced in these unusual areas" apparently pulled out of nowhere. The calendar of Satanic festivals mirrors the Christian liturgical calendar, because of course it does; just like those sneaky, evil Satanists to appropriate other people's religious holidays, the bastards. He explains that the events Michelle describes in this book are part of something called "the Feast of the Beast" (you know, cultists, just because your loser god has a rhyming fetish, it doesn't mean you have to as well), a special "Black Mass" that takes place once every twenty-seven years. This special rite lasts for eighty-one days, and--

Wait, run that by me again--eighty-one days?

I thought you just said that Satanists copied the Christian calendar for their devil-y devilish devil-worshiping calendar, book. What weirdo Christian holiday haven't I heard of that lasts for eighty-frickin-one days? Or only takes place every twenty-seven years, for that matter? Lent is the closest possibility I can think of, but it only lasts for forty days. And it happens every year.

Plus, the book tells us that Michelle's "Feast of the Beast" went on from September 7 to November 27 of 1955, which comes nowhere near to corresponding to the dates for Lent.

And that's not even getting into the hassle and disruption of work and everyday life and--for non-Canadian Satanists--complex travel plans and paperwork that taking part in a religious festival that eats up nearly three months would generate. No wonder they don't do it every year.

Anyway, before we get down to the nitty-gritty of Michelle's disturbingly sexualized hallucinations flashbacks, we're given a brief description of what the Black Mass entails: Satan leads a procession around the room, stopping periodically to give his followers mystical visions of Hell and deliver a speech about "the current status of evil" in the world, whittle away a crucifix and throw the pieces into the fire, and watch as new priest-initiates cut off fingers to prove their loyalty. And in case this is all starting to sound suspiciously like bad performance art to you, fear not--it's also strictly, pretentiously choreographed: 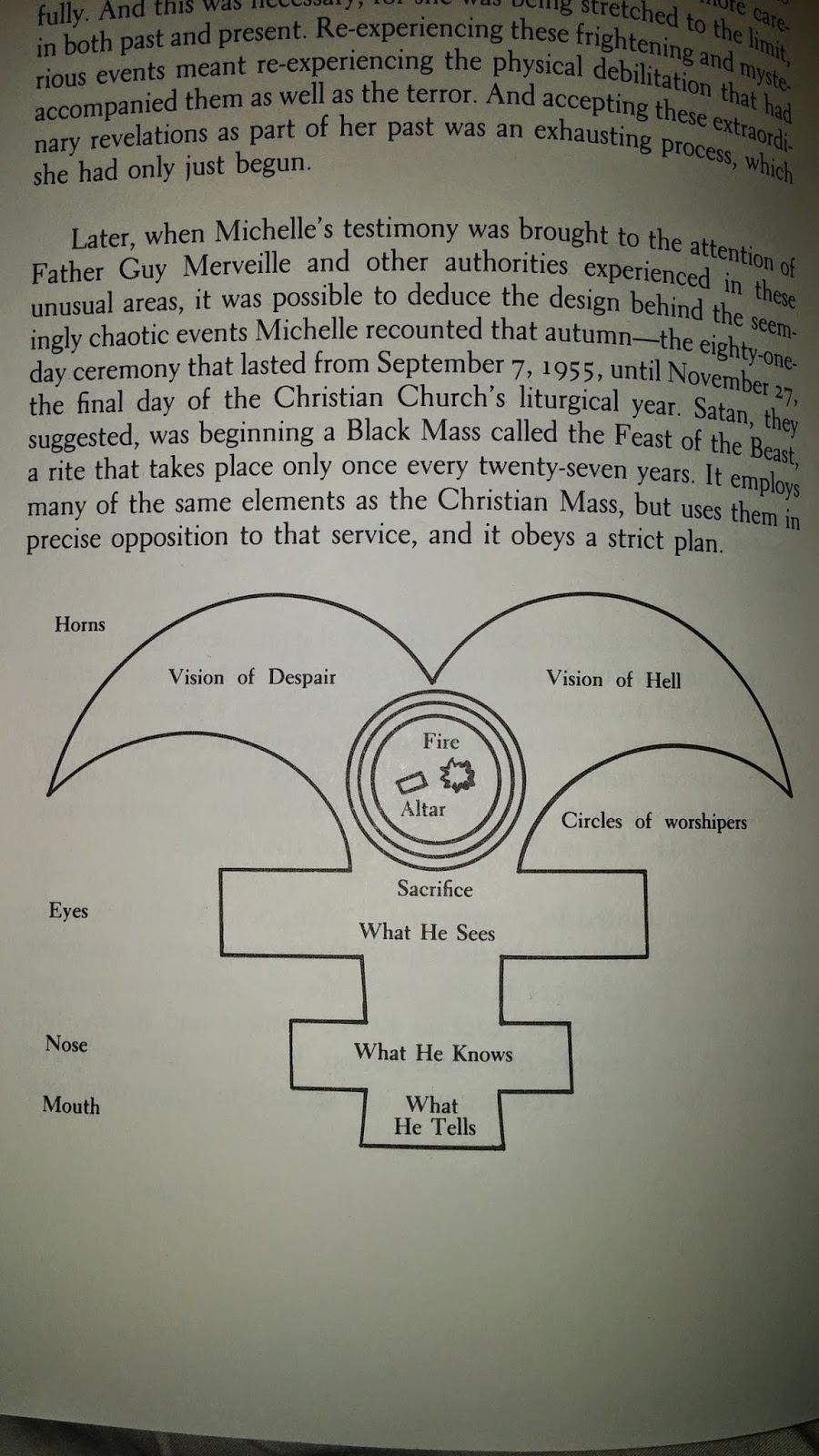 That's the Horns of Death, "the Satanic emblem used on the altar cloths and the backs of cloaks" which I distinctly remember being described as a thirteen-pointed star--which this thing looks nothing like--in earlier chapters, but whatever. The procession moves along a path that suggests this very sacred, ancient, and suddenly-appearing-for-plot-purposes shape. It makes me wonder, yet again, just how enormous this room would have to be for the vast multitudes of Satanists Michelle describes in previous chapters to be concentrated into those tiny circles in between the "horns" and still have acres of space to move about in. Also a shit-ton of unused space, if we're following Michelle's admittedly rather shaky continuity and assuming the room is still round.

Michelle, weak and unsteady on her feet from pain, notices that the circles of Satanists are starting to form into lines, making a path for Satan who is now emerging from the fire. Which, of course, means bad news for Michelle:

Coiling his tail around her waist, he paraded along on monstrous legs, dragging her up one of the paths defined by the rows of priests. Gasping, Michelle saw that, wherever he stepped, his footprints were burned into the ground.

The more I read about Michelle Remembers Satan, the more I wonder why the Satanists ever bother to summon him into the physical world at all. People don't tend to like it when huge terrifying monsters roar at them and create storms in their houses and burn their property, no matter how evil and delusional said people are. Also, why isn't it within Satan's capability to take on a form where he wouldn't be wrecking everyone's shit without even trying, or scaring the crap out of the little girl whose cooperation is apparently very important to the ritual? Is it just that he can, but won't be bothered to? Remind me again why anyone puts up with this braying jerk long enough to worship him for eighty-one straight days?

Then Satan does something that is actually cool, which is rather out of character for him, but I'll take it anyway. He conjures up visions of his plan for the future, so real and vivid that Michelle feels as if she's right in the middle of them.

And you know what? I actually like those visions:

Looking down, Michelle saw a city, in minute detail. There was a man standing at a window high in a skyscraper. Behind him she saw a luxurious office. The man was looking out over the city, but his vision was turned inward. He was in despair. That was all she saw. A glimpse of a man, of an emotion.
The skyscraper and the man disappeared. Now she saw a nice-looking man, a good man who had made a mistake or come to the end of his rope...The man went to a telephone booth on the corner, and dialed a number. The telephone rang, but no one answered...He leaned his head against the glass side of the booth for a moment, and then he walked away into the night. He had given up. It was too late.
Another scene was summoned up. A woman was sitting on a sofa in front of the fire. There was an empty glass in her hand. She was listening to a phonograph record. The music came to an end, but the record kept going around and around, wup, wup, wup...The woman did not move. She sat there holding the glass, staring into loneliness. The child felt her despair.

Wow. Wow. That is the setup for an evil plan far, far too complex and mature to have come from the villains of this book. Remember the banal evil fail in the last chapter? This is believable as the aftermath of an actual, viable banal evil villain's actions. How real and scary would this book feel if the "Satanists" were actually some sort of bland, suited-and-tied think tank or special interest group constantly coming up with ideas for breaking down institutions and social structures that encourage human connections, while perpetuating the ones that break down communities and relationships and push people into lives of isolation and depression? Not out of over-the-top, cackling, I'M A CARE BEAR VILLAIN WHO HATES FEELINGS evilluls, but out of some misguided sense that the "old ways" are somehow holding back progress. Or even just not fully understanding the importance of those ways, due to stunted empathy and a lack of imagination.

Ah, but it's hard to write a villain like this (and the book flushed the possibility down the toilet long ago when it started cramming insane troll villains and over-the-top supernatural events down our throats anyway), so our authors don't even try. Instead, Michelle closes out the chapter by informing us that all high priests of Satan cut off the middle finger of their left hand as part of their initiation into the cult. Given what a treacherous sea of impossible images and conveniently-suddenly-existing-for-plot-purposes characters, rites, buildings, and logic this book is, I guess I shouldn't be surprised that the Satanists have morphed into the Yakuza. Or maybe Satan just got sick and tired of being flipped off. Given his lovely personality, I bet it happens to him a lot.
Posted by Lady Evil at 2:16 PM